- October 22, 2010
The owl and the pussycat is a poem most of us Brits are introduced to as children... and we seem to remember the lines pretty much for the rest of our lives - well they are stuck in my brain anyway...  in particular the third verse which goes like this

Dear pig, are you willing to sell for one shilling
Your ring?' Said the Piggy, 'I will.'
So they took it away, and were married next day
By the Turkey who lives on the hill.
They dined on mince, and slices of quince,
Which they ate with a runcible spoon;
And hand in hand, on the edge of the sand,
They danced by the light of the moon,
The moon,
The moon,
They danced by the light of the moon.
You can see where I'm going now can't you...?  Yes, the slices of quince... a perfect accompaniement to mince and eaten with a runcible spoon.  Well I knew what a quince was - although I have to confess to never having eaten any until quite recently.  Quince is inedible straight from the tree, maybe this is why its not as popular as apples or pears, but once cooked it's delicious.  Historically, quince was eaten with the meat dish.  It can transport a humble meat serving into a meal fit for Kings (or a wedding feast).  The runcible spoon?  Ah well, as far as I know, a runcible spoon is a spork - saves having to purchase both a knife and fork, and as such is quite a clever instrument!  But I digress... 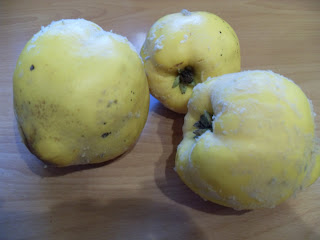 At our local apple festival we were all encouraged to take away as many apples as we could - for free - it's been a bumper harvest this year for everyone.  Along with the apples there were half a dozen quince going spare and so I nabbed three of them.  They sat for a few days in the kitchen silently accusing me of wastefulness and greed before I finally got around to using them. 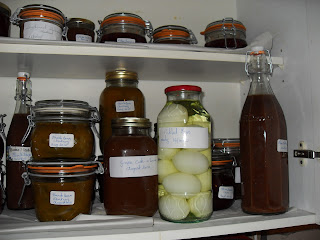 My store cupboard is pretty full at the moment - we have more than enough jams and jellies to last us a year as well as to give as gifts to others, so although quinces are superb for helping other fruits to set (they are very high in pectin) and make wonderful jellies in their own right, I really did not fancy another jar of something to spread on toast. 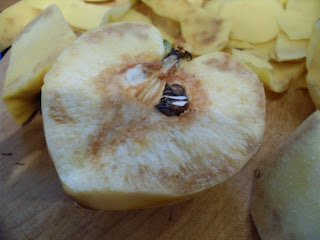 I then discovered this site... the lady over at Norfolk Kitchen has posted a recipe for making mincemeat using quince as a novel alternative to apples and sultanas I guess.  That would do, we certainly will need some mincemeat come yuletide.  By the time I got around to cutting up the quince they were definitely past their best.  This was sad but unavoidable, I don't know how long they had waited before the apple festival, but they certainly had sat for a week in my kitchen while I tried to deal with a mountain of grapes that would certainly not keep.  More on that later. 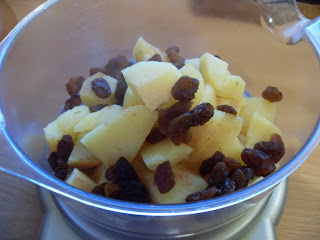 I salvaged what I could from the quince and poached it until it was tender - didn't take hardly any time at all - they were very over ripe to start with. 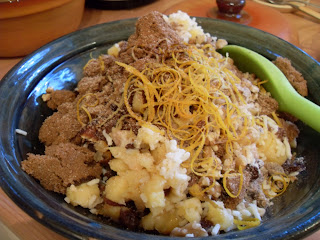 There wasn't quite enough for the quantity stated in the recipe so I made it up with some sultanas.  Then mixed with all the other ingredients, the recipe said to use a container with a lid but I didn't have one of a suitable size so I used an earthenware dish and covered it with foil.  It spent the requisite three hours in a very slow oven (except for the half hour that I had to bake bread, when it rested in the top oven which was nicely warm from the bread baking below) and I basted it quite frequently, the smells were lovely, very seasonal.
The recipe said to baste it while it cooled in order to distribute the fat evenly and then pot into sterilised jars.  Well I didn't quite follow that exactly, but I did stir it quite a bit before adding a good glug of amaretto (the recipe called for cointreau but I didn't have any and so reached for the next best thing) and then put it into the still warm jars and sealed the lids.  It need only last the couple of months until December so I am not too worried about 'keeping qualities'. 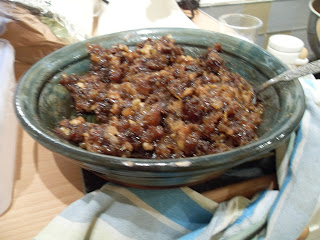 It tasted good but a tad too many dates to be my absolute favourite, but a good starting point for developing a truly unique mincemeat.  I am happy to say that I do have a quince tree, this was it's first year and so we had no fruit, but in a couple of years we should get quite a few... I hope. 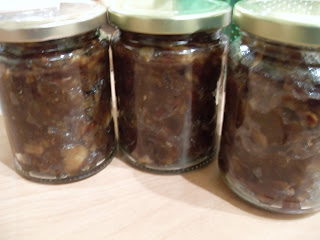 Cooking Festivals What is a Technobilly?