- October 19, 2010
At the moment I am almost snowed under with produce that requires something done with it... With only one maslin pan, it's hardly had time to go cold before it's back on the heat again... I have three large buckets full of grapes demanding attention, along with two huge bags of mixed variety apples... (a step by step guide to bottling apples will be forthcoming Jo... but please bear with me on this one... I'm running out of jars)  before I decide what to do with all this fruit, I thought I would share with you, what I did with four kilo's of free damsons. 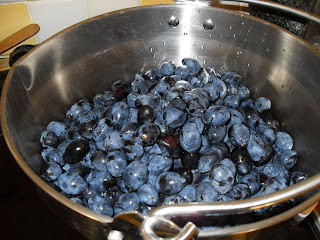 A couple of weeks ago, on the way to my allotment, I passed a really friendly sign that said 'Damsons, please help yourself, we've had tons!'... so we did.  It was unexpected and threw me into a bit of a tiz because I wasn't sure what I wanted to do with them.  After a bit of searching through my recipe books and old cuttings from magazines I came up with a plan....

They were washed and all bugs removed.  Then I added about a pint of water and two teaspoons of mixed spice popped a lid on and brought them slowly up to a boil. 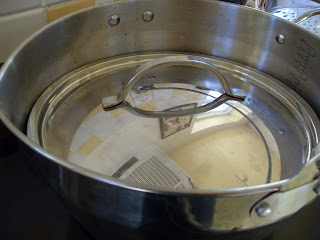 I boiled them for about two or three minutes - they were already very ripe and didn't need much to make them very soft.  I then strained them through a sieve, pushing the pulp through with the potato masher. 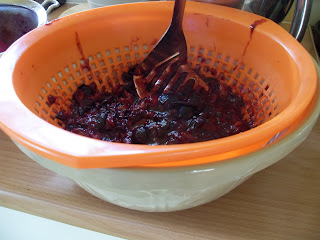 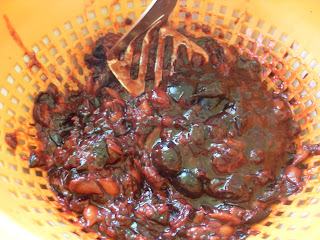 I weighed the pulp and added an equal quantity of sugar and then stirred it over the heat until the sugar dissolved.  Then I boiled the fruity mix vigorously and checked it every few minutes for setting point.  It was not long before I had damson jam in the pot. At this stage I decanted some of the damson jam into 2 warm sterilised jars.  The rest of the jam continued to boil in the maslin pan until it was really really thick. 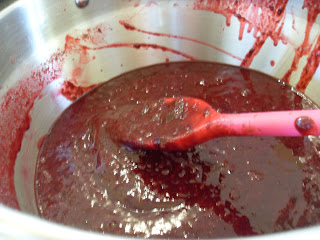 At this stage it is called a cheese (not sure exactly why, but it is good served with cheese and can also be cut into slices once it has gone cold... like cheese).  As well as the two jars of jam, I got three jars of damson cheese. 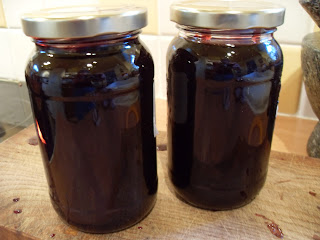 But then I boiled it a little more - almost too much as it started to burn on the bottom of the pan - so it was quickly taken off the heat and spooned into a shallow container and left to set. 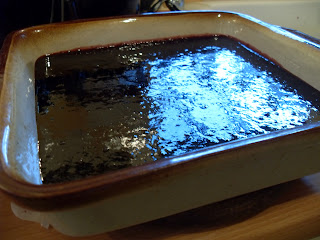 Once all had cooled down and the jam and cheese had been labelled and put away in the cupboard I was left with my shallow dish containing a very solidly set damson mixture. 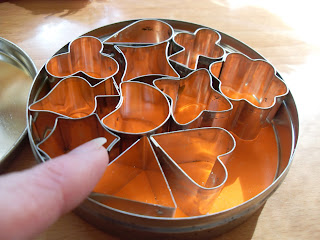 I used some small cutters to create interesting shapes of the jelly/jam mixture and put them onto greaseproof paper - some of them I simply rolled into rough ball shapes. 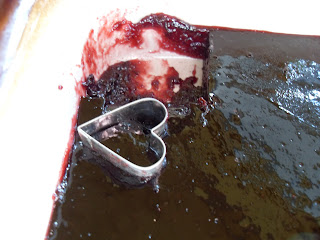 These were then placed into a very cool oven - just barely on at 50 degrees - and I left them there for most of the day to dry out.  Sometimes I turned the oven off for a while because I thought they were getting a little too hot.  The jelly shapes dried out quite a bit making them less sticky to pick up. 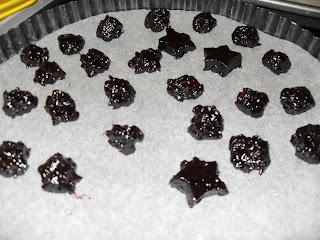 I coated some of the jelly shapes with castor sugar - they are so very like the fruit jelly sweets that you can buy in the shops only of course they tasted much better.  Some of them I put into tiny paper cases and covered with melted milk chocolate.  Once these set they were simply DIVINE. 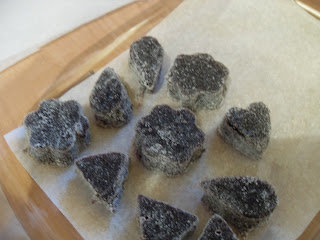 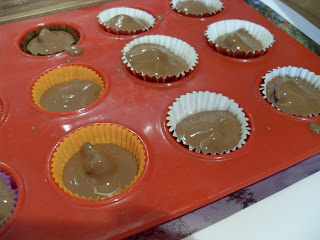 I've stored them away in an air tight container for Christmas.  Now all I have to do is to make/find some suitable small boxes for them and I will have some really original presents - for special people only mind you!  Considering the amount of time these spent in the oven (albeit very low) they are not very economic to make - but I am not buying very much for gifts this year so I think it will even out with a bit to spare on the side of economy, of course my little damson jelly sweets have quite a hefty carbon footprint but I am most definitely NOT going to spoil their taste by dwelling on that.


Cooking Gardening What is a Technobilly?