Hot as a Cucumber

- August 17, 2010
Having been struck down by some kind of allergy induced migraine for the last couple of days, I have been watching and worrying, as freshly harvested produce from the allotment sat idle in the fridge. Feeling a tad better (migraine like headache still not gone but accompanying running eye and nose has abated). I decided to do something about it before the harvest was lost.
In desperation to find something to do with the huge glut of cucumbers that I have (and still more swelling on the vine almost as I watch) and bearing in mind that I am not a fan of vinegary pickles, I decided to make Cucumber and Lemon Jam.
Well it said it was a jam on the recipe which dates from the 1930's... but it has turned out to be more like a marmalade, with that slightly bitter, very grown up taste that marmalade has.
Marmalade is a bit like a fine whisky... you need age to appreciate it's subtle flavours - actually I am still not old enough to appreciate whisky - blagh.... - but marmalade, which I hated as a child, is starting to grow on me. 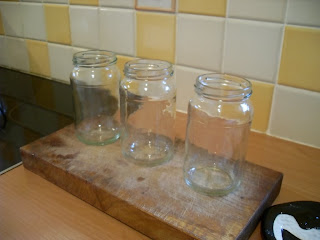 Anyway... this is what I used:
2lbs Cucumber (outdoor cucumber, not the tubes of water that you buy in the supermarket), peeled and cut into chunks - this was my first mistake. Very difficult to spread chunks of cucumber on your toast, so next time I will slice them thinner.
3 fresh lemons, 1.5 lbs granulated sugar and 1 pint water. 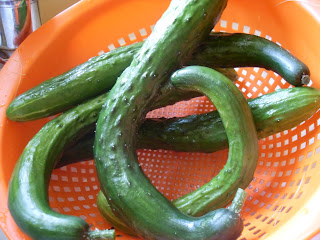 And this is what I did with them:
I cut up the lemons roughly and popped them into a pan with the water, brought to the boil and simmered for 45 minutes with the lid on. Mistake number two. Even though the lid was on, they practically boiled dry. The plan had been to then use the lemony water to cook the cucumber. Since I only had about half a teacupful of lemony water left, I popped the well cooked lemon mush into a muslin bag and added this with about three quarters of a pint of water to the pan then added the chopped cucumber and brought it to the boil.
I simmered it for about 20 minutes until the cucumber was soft. Next I added the sugar and some zest of lemons that I keep in the freezer for 'just in case' scenarios such as this. I boiled this until it reached setting point. Setting point was determined by placing a small saucer in the freezer until very cold and then dribbling a little of the hot jam onto it and allowing it to cool. I would then tilt the saucer to make the jam run slightly... hopefully being thick it would only crinkle... that would tell me it was time to remove the jam from the heat and fill the hot jars. This was mistake number three (is it only three? seemed like much more). It definitely crinkled so I filled the jars - only two jars were filled to the top, the remaining liquid, which wasn't enough for a full third jar I put in a bowl, intending to use this on my toast first.
The following morning, the 'marmalade' in the bowl was beautifully set, the jars were very runny. Mmmmm... I had some of the marmalade from the bowl on my toast and then put the rest along with the contents of the bowl into a pot and brought it back up to the boil. I boiled it for a couple of minutes only and then taking it off the heat added half a bottle of Certo pectin. This time I filled two and a half jars. It seems to be setting - the cucumber is floating to the top and even though I waited for it to cool a bit and then stirred it to re-distribute the lumps, it hasn't made that much difference. Fingers crossed. Will let you know how it turns out tomorrow. 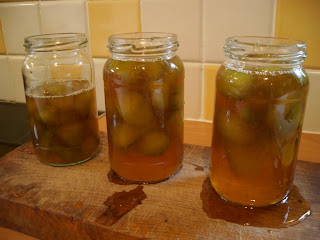 Made a pigs ear of pouring it into the jars too!
By the way, the taste of the cucumber pieces is .... unusual... but marmalade lovers would not turn up their noses at it.
PS.... in the end I threw it all away... after using a whole bottle of Certo pectin it still did not set properly and the pieces of cucumber were slightly bitter... it's all a learning process lol! guess it will be pickled cucumber next time!
Cooking Gardening