One Woman Went to Mow 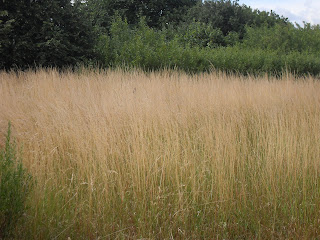 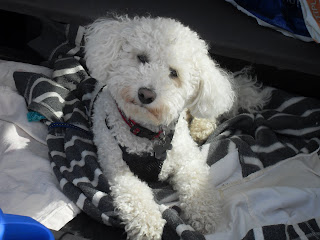 Went to mow a meadow! 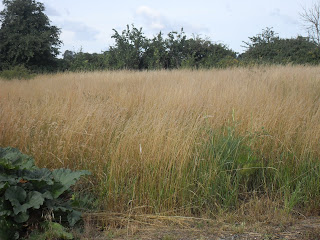 This was my birthday present from last year. 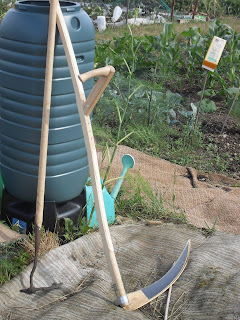 I waited several months to get it... as I only got an I.O.U. on my actual birth day. It's something that I decided upon the moment I laid eyes on the couch grass at our allotment. No electricity there and I hate the sound of the petrol strimmers - not to mention the fumes and the general wearing of helmet and goggles... just not my idea of how to spend a summers morning. 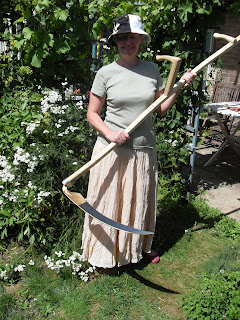 I thought about it a great deal and I did quite a bit of research before plumping for an Austrian Scythe from here. The Austrian scythe is much lighter and easier to handle than a traditional English one, apparently. 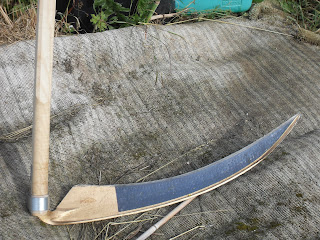 I couldn't afford to go on a course in how to use it - that was not included in the I.O.U. Just as well... I would never have got there in time... it was quite an adventure to collect it... Sat Nav's don't seem to understand the Dorset lanes... and I arrived about three hours later than I said I would but the chap who runs the shop was still there and he was very helpful, he adjusted the snath (you see I know all the technical terms), that's the wooden handle bit, for my size and the length of my arms, showed me how to attach the blade and gave me a booklet on how to use it.

Well! It's not an easy thing to learn from a book but I have been diligent and practised quietly on the allotment very early in the morning until I can proudly say... I have almost got it!! 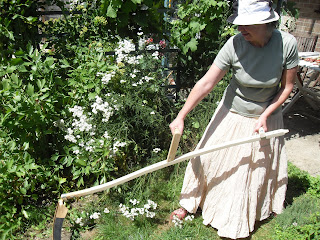 You see it's a magical tool. It sings as it cuts through the grass... the most amazing swishing noise, and you get into a rythym that is somehow quite spiritual... you move in a smooth twisting motion, swaying from side to side like a dance... a very old dance.... and the whole thing feels just 'right'.

And the sun is shining and the birds are singing and the grasshoppers leaping out of your way and there's not a single soul in the field but you and then the next stroke goes all wrong... it's out of kilter and the rythm is spoiled and you have to stop and compose yourself and start again. Eventually I hope to get really good at this... but for now... two hours to clear quite a big space with hopefully no one watching my clumsy attempts... will do me fine. 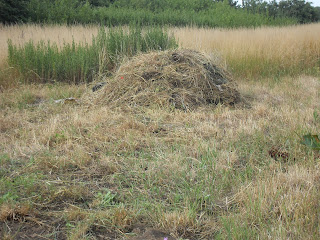 Gardening History I'm a Fan The Dog Weather What is a Technobilly?