- July 14, 2010
As I am sure most of you have realised, I am totally SOLD on the hay box cooker. What I can't understand is why this 'old-tech' solution to low-energy (low-cost) cooking fell into disfavour/isn't better known or more popular. We all like getting stuff for free. I can't imagine why people who would happily use an electric slow cooker would not consider a hay box. Some members of my family were laughing at my antics... I even had strange looks from BillySteve the first time I suggested we make one of these... some members of my family are still laughing but I think I know who will get the last laugh on this one. For example:
The Boston Baked Beans recipe I chose is a vegetarian one (I haven't tried meat in the cooker yet but that is planned for Friday which is traditionally curry night here at Technobilly Central) but even so, the recipe required cooking the beans until almost soft (depending upon the age of the beans that could be anything from 45 minutes to 2 hours on the stove top), followed by making the tomato sauce and then cooking the whole thing for another 4 hours in a low oven. That works out at several pounds worth of energy. 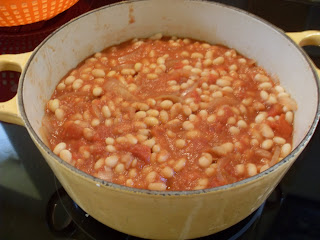 I soaked the dried beans all day yesterday and then at bed time I boiled them rapidly for ten minutes before transferring the pot to the box cooker where it stayed all night. This morning the beans were perfectly cooked (perhaps a bit over-cooked by the recipes requirements) and I then added them to the home made tomato sauce which I boiled for a minute or two before replacing it in the hay box. I must have saved quite a bit. Next time I do it I might make the meat version which has some lovely thick pieces of belly pork in it. 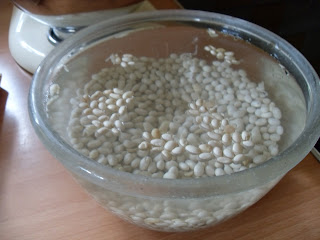 On Friday I shall make the regular chicken curry in the morning and leave it in the hay box during the day. This will be the first trial of the cooker with pieces of meat. I am pretty confident that it will work fine.
There are one or two rules that need to be kept to ensure success. Firstly you need less liquid than normal for your recipes because there is no evaporation due to escaped steam, however at the same time you need enough liquid to pretty much cover your ingredients. I am not sure how well things would cook if they are sticking out of the stock... that might be worthwhile testing at some point.
Larger pots of ingredients work better than small ones - but I have used a smaller pot for the bean dish and it seems to have worked ok. 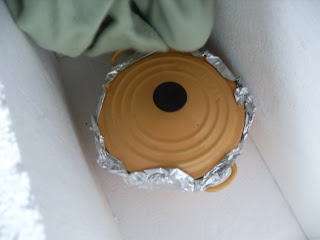 You need to pack your insulating material very well around the pot and cram as much of it as you can into the box before putting on the lid.
You need to ensure that the contents are at boiling temperature (which means boiling for a little longer if you are cooking things like dried beans or meat, to ensure that these items are as hot as the liquid they are immersed in).
Since the cooker is home made there can be no hard and fast rules about times that would work for everyone, but bearing this in mind, if you decide to make one for yourself (you can use a wooden box or I have even seen posts online where people used cardboard boxes or baskets), it is probably best to do as I have done, and work up slowly from something like porridge or rice pudding, making each subsequent recipe more difficult... mmm that's a thought... rice pudding - one of my favourites. 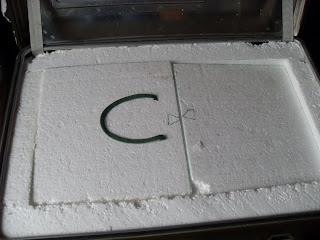 After the curry (which I will report on I promise) I think I might try putting a main course and a pudding in the box at the same time.

There will, of course, always be things that I cannot cook in it, for example when BillySteve said I'd like to see you bake bread in it.... I simply ignored the remark - he was referring to the fact that our conventional oven uses sooooooooo much electricity, and I bake bread on a regular basis - but I now do five loaves at a time so that the oven is as full as I can get it, that's economising in a way.
And just to be sure of getting the last laugh... since we have started watching our expenditure on electricity, gas, food, insurances etc... we have been able to reduce our total bills by £60 a month on what we were paying last year.... There are more savings to be made that we haven't had time to look at yet and of course that was before the hay box cooker. Whose got a big smile on her face now?
Cooking What is a Technobilly?