In my Garden This Week

- June 20, 2010
I was late starting everything this year, but with the help of some kind friends who donated veggie plants and some hard work preparing the ground, I think I have now pretty much caught up. Of course some plants simply grow on their own with no interference at all from me.... (these are the ones I like the best!)
The Lovage is reaching nearly seven foot this year! I haven't used the leaves much this summer but will be collecting the seeds later on for sprinkling on my home baked bread. 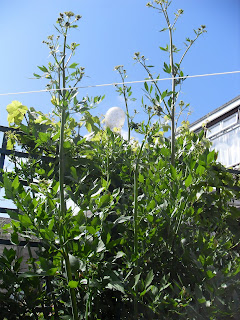 The vine is promising lots of grapes this year - but to put this into perspective.. we have had the vine nearly 15 years and have never yet got a single ripe grape from it... the birds or the wasps have beaten us to it every year! 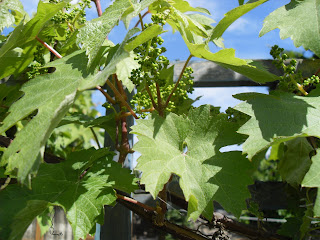 I am growing a couple of outdoor cucumber plants in an old crate, I've never grown cucumber before so to hedge my bets, I've also put some into the allotment as well. 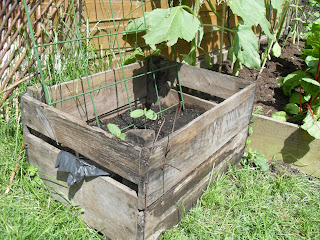 I have some potatoes growing in a sack that will be ready soon. Not enough for more than a couple of meals but luckily I have plenty more at the allotment! 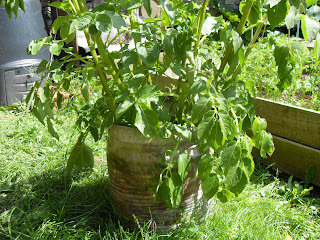 The mixed salad leaves I scattered in the cold frame are giving us a salad lunch every day at the moment... and there's enough for the hens to get some too! 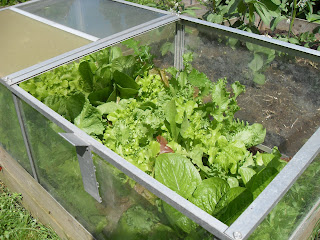 The Rocket nearly went to seed but I just managed to pinch off the flower heads just in time. Now we have loads more peppery leaves for the salad bowl. 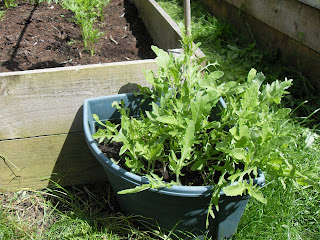 The sunflowers are slowly but surely creeping upwards. The hens will get these in the autumn - I can't be bothered trying to prise out the seeds and get them out of their skins ready for toasting... there must be a technique or a gadget for doing this... but I don't know what it is! 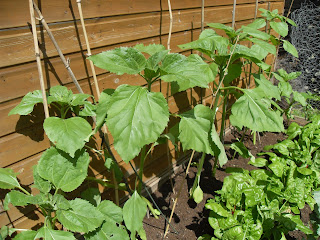 The rainbow chard is still young and sweet and we had the first pickings from it a couple of days ago, it was delicious! Can you see in front of it I have a couple of rogue poppies growing up out of the grass, well I've decided to keep them for the seeds... home made poppy knot rolls for breakfast... mmmmm! 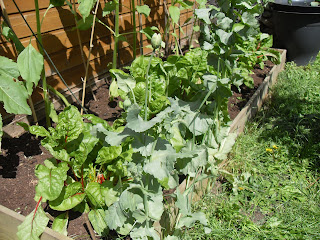 The broad beans are flowering... 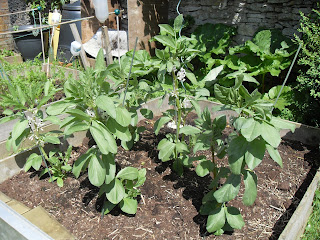 And the carrots are getting bigger.... 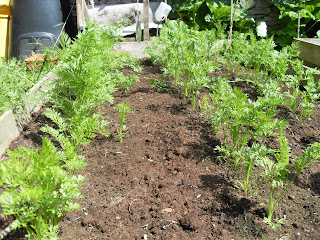 The Jerusalem artichokes are getting ridiculously big! You can have too much of a good thing... I may have to thin these down a bit in the autumn. 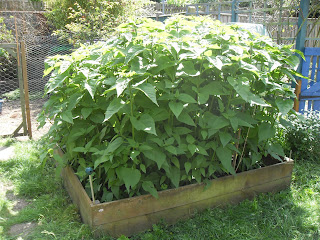 The strawberry harvest this year looks like it is going to be pretty poor though... I think I shall move them to the allotment next year where they can have some space. 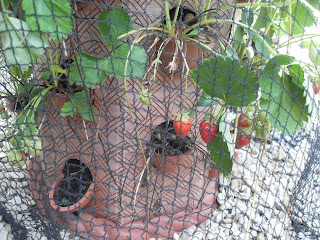 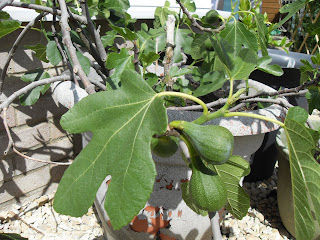 .....and keeping it company is a newcomer to the garden - it's a Myrtle bush. The berries from the Myrtle can be used a bit like Juniper... great with pheasant or game! not that we have either of these very often! 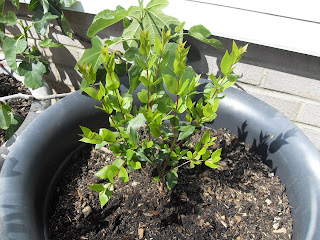 The cherry is a little sad... there's only about seven cherries on it in total, but it is in a pot and I don't think it is very happy - I forgot to water it at the crucial moment and so a lot of cherries simply shrivelled up and dropped off! 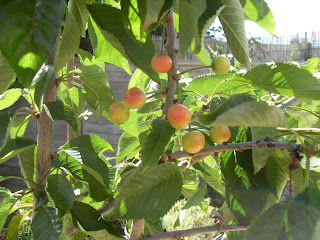 The herb garden is pretty prolific - I have two sticks of herb butters in the freezer and a jar of dried marjoram already... I used the last of the chive flowers mixed in with some boiled eggs and mayonnaise in a sandwich for my lunch today and washed it down with the elderflower cordial that I made last week. 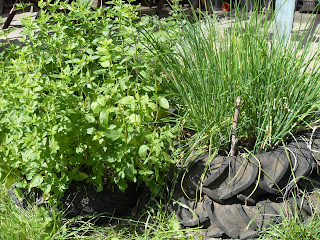 Oh and the Yarrow... not for eating ... yarrow is excellent for oily skin or hair... I make a tea from it and add a teaspoonful of vinegar and use it as a hair wash or final rinse. Sometimes I infuse the yarrow in oil and use the oil to make a balm or cream for my skin. 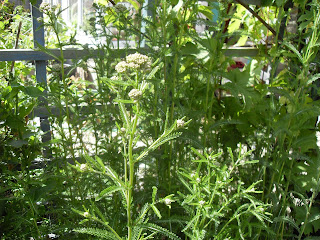 Lots of Feverfew self-seeded all over my garden this year. I used to take the leaves in sandwiches to cure migraines but in all honesty it didn't work for me... and it didn't taste good either. The pretty daisy like flowers attract loads of insects though so I don't mind having it around. 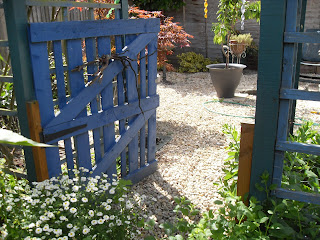 The French tarragon was nice on last Sunday's chicken... but there isn't that much of it so I shall have to let it recover before I use any more. 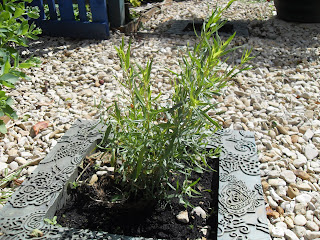 The nasturtiums have only just started but I am looking forward to scattering the flowers on my lunch time salads and using the seed pods like capers. 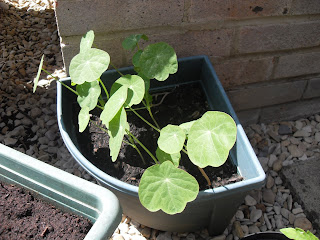 Hoping the blight doesn't get my tomatoes this year. Last year I made rather a lot of green tomato chutney due to blight - the chutney is great but I still have several jars in the store. 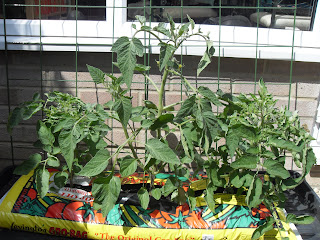 You may have noticed a pattern here... most of the plants in my garden are edible or useful in some way - I don't grow very much simply because it is beautiful. But I do have some pretty but useless stuff in the garden....
The rose is a really nice smelly one... but it isn't totally useless... the petals can be eaten but are also really nice scattered into the bath... very romantic! (Except our bath is rather small and if you want to fit two people in there you have to sit and hug your knees - both of you!). 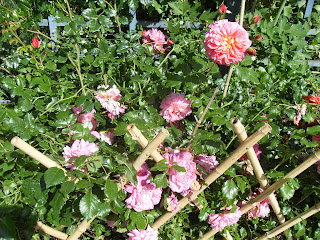 The Mock Orange has wonderful smelling blooms - but I have never quite got the pruning right with it so it grows very tall - mostly foliage and not many blooms at all... it's on borrowed time too... hubby is about to cart it off to the dump ... unless I can think of somewhere else to put it. 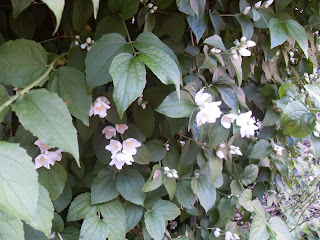 This is Cotton Lavender. It is one of those plants that I thought was a good idea at the time but it has grown and spread far beyond the space allotted to it, it does attract bees mind you so I simply hack away at it every autumn and hope for the best... and it always comes back the following year! 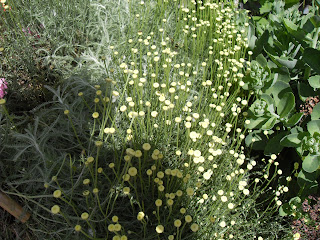 These little pinks were purchased about three years ago for the window box... they are supposed to be annuals but I haven't collected seed ... just neglected them and they grew last year but didn't flower, but this year the flowers came out! YAY! 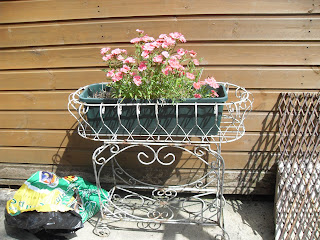 From all of this you might have the impression that my garden is HUGE. Well actually, it's not. Half of it is gravelled over and I have to grow things in pots on this side. 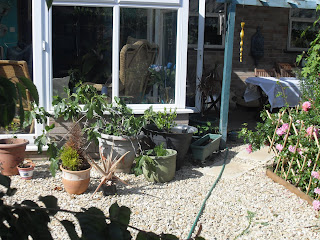 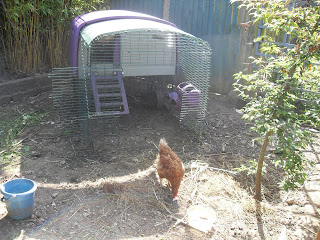 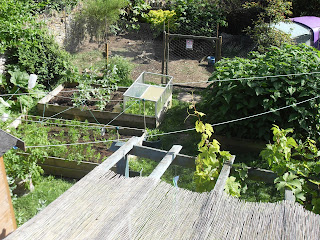 Cooking Gardening What is a Technobilly?