Trip to Japan - Part Six In search of Perfection 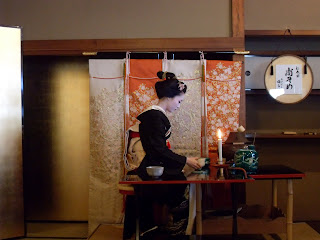 I am dedicating this post entirely to one topic... The Geisha. There are many misconceptions about the role of the Geisha both in Japan and the West. The most common is that they are prostitutes.... Wrong! Or that in the past they were prostitutes.... mmmmm.... not quite... but you could be forgiven for thinking of them as high class courtesans. 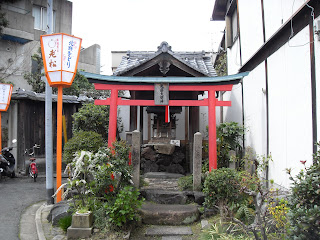 The art of the Geisha is dying out.. at one time there were thousands and thousands of them throughout Japan... nowadays they are found only in a very few places and their numbers are dwindling. It is therefore actually very rare to see them. We snatched a quick glimpse of three Maiko (trainee Geisha) making their way up to a temple we had just visited - we hadn't realised that it was a special day to celebrate the beginning of the cherry blossoms. The girls walking in front and behind in Western dress are usually considering the life of a Geisha and will work for free while receiving lessons. If they pass their exams they themselves will become Maiko. Many of the girls discover that it is not the life for them and they leave. 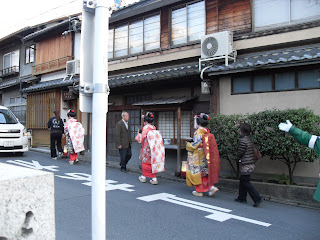 The Geisha is trained in traditional singing, dancing and playing a musical instrument. She also receives instructions in manners and deportment, in the art of conversation and being entertaining company... in the past she also received instruction in the art of makinglove... nowadays this last one is not obligatory. It takes five years to turn a trainee (called Maiko) into a Geisha and the Maiko must take exams and pass them before being allowed to continue with the training. During this five years they do not receive any money other than pocket money. It is a hard life full of discipline and self denial. Becoming a Geisha is a vocation. 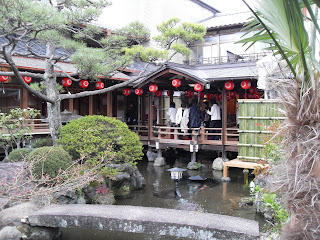 They can be hired for the evening to amuse and entertain... the most gifted of them commanding the highest price. Many of the most sought after Geisha are 60 or 70 years of age and spending an evening with one of them would be like having a private tea party with someone like Stephen Fry (my apologies for comparing Stephen Fry to a Geisha but he is just the sort of person I would love to spend an evening with... how entertaining he would be!!) In the past if you had the money you could ask to spend the night with the Geisha and I think she more or less had to agree (provided the price was right) but nowadays accepting such requests are completely at the woman's discretion. 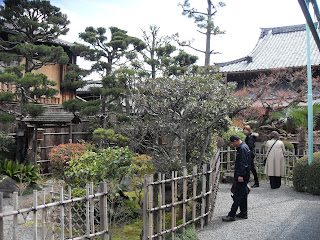 Every year the Geisha houses put on two weeks of dancing for the public at which time they introduce the newest Maiko. We took a half hour bus journey from Kyoto station to one of the older parts of the town and found the little theatre. We bought tickets which included a tea ceremony before the performance. 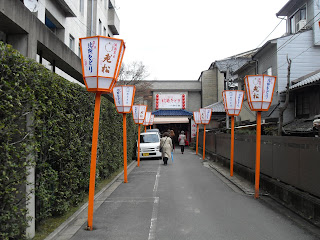 It wasn't exactly well publicised and the theatre was very small. We were a small group of 7 and we saw four other foreigners, otherwise the audience was entirely Japanese and on the whole quite elderly. BillyChristina said that the young people would prefer to go to pop concerts or musicals such as Beauty and the Beast (which was showing in Osaka) rather than the traditional Geisha dancing. I thought that was a little sad. 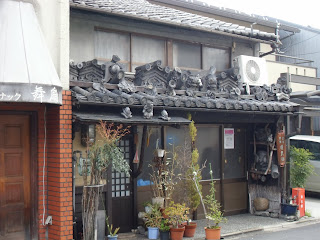 I did not know what to expect. We were shown into a room with tables and chairs and we were lucky enough to be in the front row of tables... directly in front of the Geisha and Maiko who were performing the tea ceremony. First we were given a little cake thing... it was white with red bean paste inside and very very sweet and then the green tea arrived in a bowl about a quarter full and it was all frothy. It was just as well we had the cake first because the green tea is very bitter and only palatable after eating something very sweet. 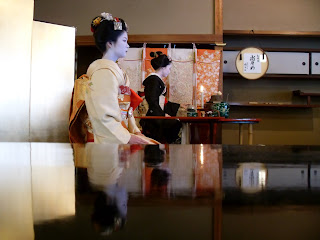 While we ate and then drank the tea, the Geisha performed the tea ceremony. I cannot describe it but it was beautiful. There are several different actions in the tea ceremony and each must be performed perfectly. All of her movements were measured and executied smoothly and slowly like a dance. She was beautiful and graceful and every single moment was perfection itself. I simply stared at her in wonder and almost forgot that I had to eat my cake and drink my tea. The Maiko (the young lady who is probably only about 15 years of age, making her debut this year) took the tea bowl from the Geisha and presented it to a lucky lady at the end of my row... we did not drink the tea that the Geisha had prepared but were brought bowls already prepared elsewhere... this is the only way that you can perform a tea ceremony with 20 people in the room. 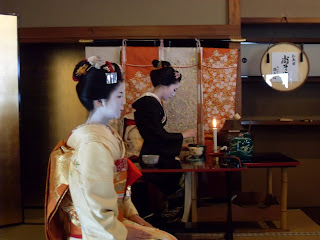 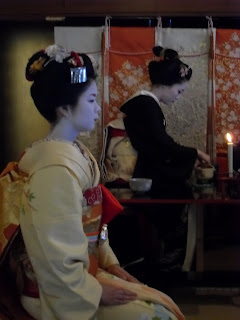 Ah the dancing.... each scene was breathtaking and although I did not understand a single word of what was going on - and there is no explanation in English in the programme - it was quite magical and funny too as some of the Geisha did comic routines making fun of drunken men. I felt really honoured to have been able to see them perform.

The more elaborate kimono and hair ornaments are worn by the Maiko... the Geisha mostly wear black and are much more subtle. Apparently the white makeup was to ensure that their faces shone out clearly in the days of candles. I am sorry this photograph is so grainy and small, it is taken from the programme. The Geisha are very exclusive and elusive too... the only way to get a really good look is to hire one for the evening. They were all beautiful... even the very elderly one's... and apart from a slight hesitation when rising from kneeling the eldest of them was most definitely a match for the younger ones. 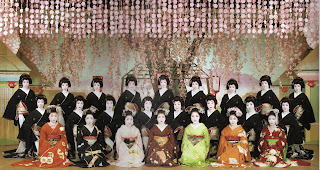 I consider myself a fairly well travelled person and I have lived some of my childhood in Singapore and the Gulf of Aden, all over the UK and I have lived in europe for several years and holidayed abroad many times, however, I have never seen anything quite like this... the beauty of it all was breathtaking... and that's what you mostly heard from the audience... a sharp intake of breath. It would be crass to say that now I can die happy but I have to admit it would be hard to top this.

Japanese Giveaway tomorrow so don't forget to pop back for that! And then I shall bore you no more with Japan!
Clothes Health and Beauty holidays Japan