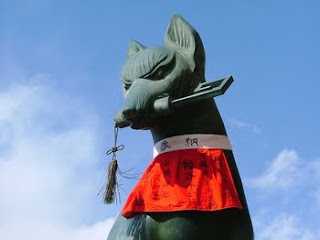 This year has been really expensive so far. Unplanned for expenses such as two trips to Scotland and to Spain have really pushed our finances beyond the normal limits. I hate it when we are in the red. This was the year that I had hoped to make an overdraft a thing of the past. Well when it's your family and an emergency you don't worry about things like that but the consequences need to be addressed.

While in Japan I prayed to Inari for wealth ... I felt myself blush because I am not used to asking for things for me when I pray (if I pray). But it was actually quite a liberating experience... to be so honest and say... I would like some money please. Well... we haven't won the lottery - which is what I had in mind at the time, but I have had a little windfall from a totally unexpected quarter, that has put us back in the black. It is such a relief I can tell you. Do I believe Inari listened to my prayer? I think it would be nice to live in a world where Gods listened to our prayers so I have asked BillyChristina to make an offering to Inari on my behalf.

My next post will be from Spain! Updates on how my daughter is doing as well as my soon-to-be-arriving grand daughter will be forthcoming. Now I just have to weigh my suitcase one more time before deciding what to take out of it!
Family Japan life the universe and all that