- March 30, 2010
Now you may think this a weird combination but somehow I felt they went together. First...The trains. The trains are very important in Japan. BillyChristina said the people define themselves by which trainline they are on. She said we are 'Keihan' people... Hirakateshi which is the town nearest to her university is on the Keihan train line. 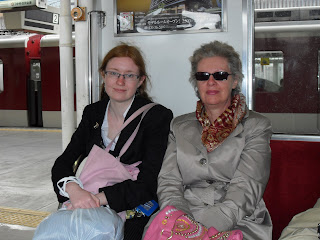 Here we are on the train after a long day sight seeing. Understanding the trains is key to getting around... it took us a couple of days to figure it out. It might have taken longer if we hadn't got our guide with us! Most of the information is in Kanji and English but the English didn't exactly jump out at you and you do need the system to be explained. 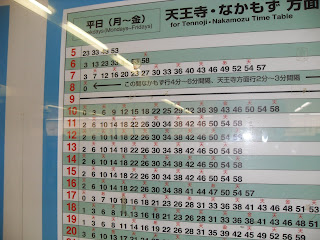 It is basically the same as the London underground. 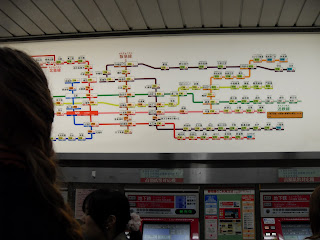 The different trainlines have names and also are colour coded. You also have a choice of trains... some are express trains that only stop at a few stations and other's are local trains that stop at every single station. All of the stops are announced in Japanese and in English so once on the train you really can't miss your stop. The tickets were really cheap too... it cost us about £3.50 for a day pass which took us everywhere we wanted to go, occasionally we needed to top it up by a couple of pounds in order to go somewhere slightly further away... but it was much cheaper than in the UK and trains were very frequent. 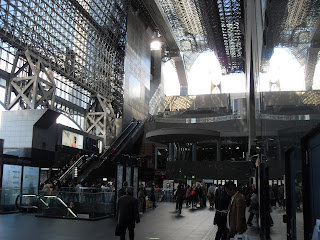 The railway companies have a lot of power and they seem to own a great deal of the surrounding areas and many of the stations were huge and had an enormous number of shops and restaurants ... you almost wouldn't need to leave the station. 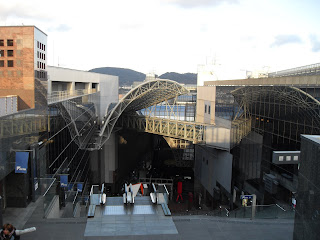 This is Kyoto station... it was HUGE... there were several floors of shops and restaurants as well as a sky garden with the most vertigo inducing escalator I have ever ridden (well almost... there was one other but I will tell you about that another day). 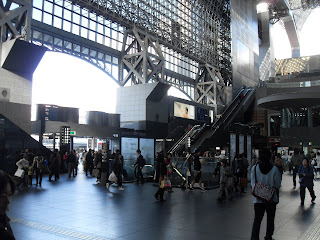 From one of the higher floors of the station we spied the Shinkansen or famous Bullet Train leaving the station. 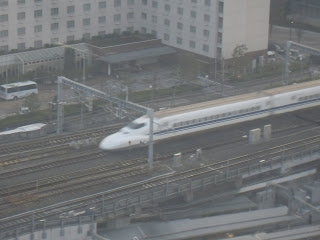 Now, on to the toilets! There were so many public toilets everywhere I was really impressed. There is nothing more guaranteed to spoil a day's sight seeing than not being able to find a loo when you need one. After a whole week of spending every single day out and about and using several different rest rooms during the day I am happy to say that every single one was clean - impressively clean and I began to look forward to visiting them! There were one or two that disappointed by only providing squat toilets.... 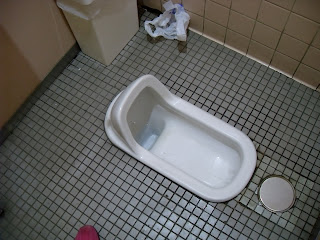 Anyone who has travelled in rural France or Italy will be familiar with this arrangement. There is a knack to it and once you get the hang of it... no problem. But most of the loos were Western style plus... I say plus because it was pretty standard to have a heated toilet seat. 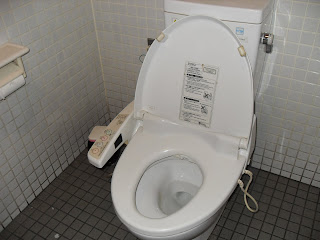 Yes I said a heated toilet seat... with buttons to control how hot you want it. Most also had bidet facilities too. They all had somewhere to put a baby so that you could safely get on with whatever you had to do... 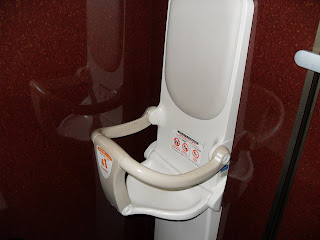 And the facility that really made me smile was the modesty sensor.... apparently the boy's toilets didn't have this. As soon as you sit down there begins a swishing and gushing noise as if the toilet were flushing... it's very loud and it's function is to disguise any noises that you might be making. In some toilet's it wasn't a sensor but a button that you pushed manually. The button displayed a music note and I thought that it would be a radio or something but the Kanji symbol on this button literally translates as Princess Music. So there you go girls... we now have a name for the noise we make in the bathroom...!! 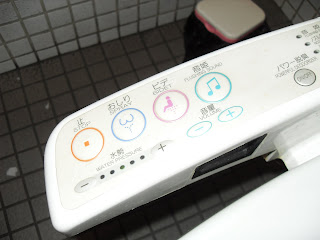 The fanciest loo I came across was in Osaka Castle. 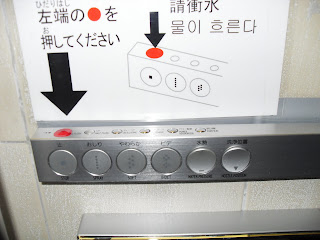 The buttons say the following: Full Flush; Half Flush; Oscillating Massage; Power Deodoriser; Dryer; Stop; Spray; Soft; Bidet Water Pressure; Nozzle Position. I was really tempted to try some of them out but then I thought it might be awkward to spend the rest of the day soaking wet if I get it wrong so I chickened out! Now is the red button the emergency STOP?

After such fancy toilet's I was always suprised to find no hand towels and sometimes no hand dryer in the washroom... most Japanese (men and women) carry around their own little hand towels which they keep in their pocket or bag for just such an occasion. These little towels were on sale everywhere and so I bought a My Little Kitty one at Osaka Castle... made me feel like a native! Here I am proudly displaying my purchase beside BillyChristina posing with Mike the sheep (don't ask!!) 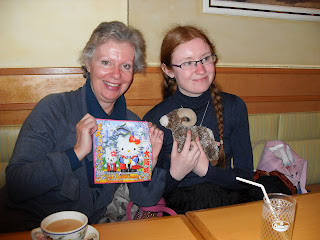