Trip to Japan - Part One - Entertainment!

- March 28, 2010
Japan is a most strange country. I would certainly recommend a visit to anyone who is planning an exotic holiday, however, there are a few things that are important if you are going to such a 'foreign' land. You MUST have a guide or at the very least a very good guide book. There is so much that is incomprehensible without some assistance... we were very lucky, BillyChristina has been there since August last year and is getting to grips with the language so was able to translate for us when required. She also has been taking Japanese history and religion classes at university so she could interpret the 'why's' too. This was invaluable because we had a lot of 'why's'. 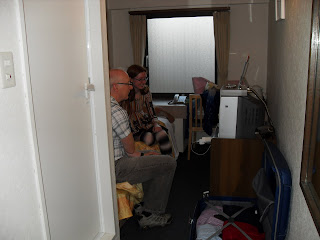 Here BillySteve and BillyChristina are getting to grips with Japanese television.

Our hotel room was very small. The bathroom was like a little pod inserted into the room. It was all plastic, including the floor. The highest setting for the shower was still too small for us so we sat in the little bath and showered that way. When you sat on the loo you could almost touch the door with your knees! But it was perfectly adequate and everything was really clean. 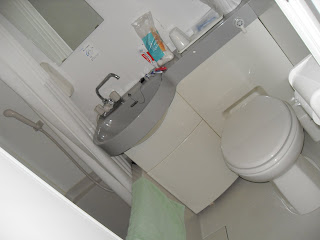 We were given slippers to wear inside - the custom being to remove your shoes at the door. The only down side with the room was that we did not really have anywhere to put our suitcases or clothes. But the lack of space only made us very conscious of being neat and tidy. Something that all Japanese seem to be!

On our first full day we visited a park and had a picnic and then went with BillyChristina and her friends to their usual weekend entertainment... the Karaoke! 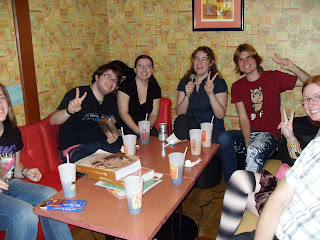 Whenever the Japanese have their photo taken they make a V symbol... (not the rude V symbol)... I asked why... but no one knew... just something they do apparently... so we did it too!

Karaoke is very very popular in Japan with all age groups. Families and friends - young or old will come here for an evening out... and if they know someone who sings well... it's a concert too! The Karaoke cubicles (small rooms actually) are located in a building with lots of amusement arcade type games and in this case a bowling alley too. The place was very noisy and full of young girls and boys enjoying themselves. We rented a Karaoke room and bought drinks (alcohol is available but we mostly had soft drinks). You can also order food but we had taken some snacks with us (you are not supposed to do this but no one bothers you once you are in the booth). Do you see the large books on the table in the picture below? That's the playlist. All the songs are listed alphabetically by song title, by artist, by album and also by first line of the song... so if you forget the name of the song or the singer you can still find it. 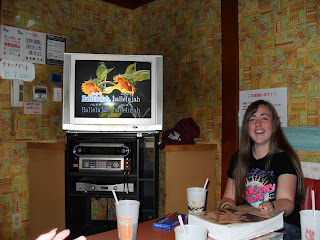 Inside the room is a large screen tv and the karaoke machine. They had a huge selection of English language songs but also Japanese popular songs as well as Japanese folk songs. Two microphones can be used for singing duets. No one minds if you can't sing - having said that BillyChristina and her friends were quite tuneful (unlike me and BillySteve who managed to massacre some of our favourite tunes). 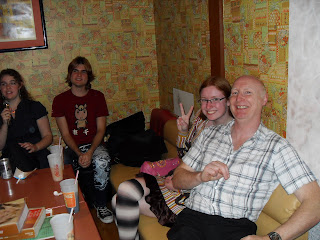 Above Katie from Canada has the mike and is giving us some John Denver country music.

We took it in turn to choose songs and then everyone just let rip! They were not in the least bit self conscious about singing in front of strangers and it turned out to be really good fun. I was amazed to hear BillyChristina singing in Japanese and reading the words in Kanji - the symbol writing that just looks so complicated to us.

After the Karaoke which took about 3 hours or so, we had a go at 'puri kura'. 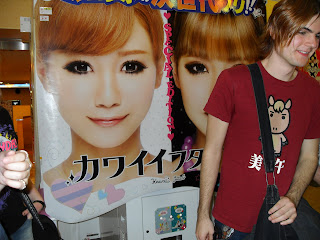 These are photo booths that are big enough to fit all your friends in and you can decorate the photographs afterwards. There were about twenty different photo booths all providing different styles of decoration for your photographs. Before you print them out you choose how large you want them to be and then you cut them up and the backs peel off so that you can stick them onto books, phones, computers, pencil cases etc... Because there were 7 of us we made our photo's really small. I need my glasses to see them properly... but it was the experience that made it fun. Here they are ready to be cut up into tiny stickers. 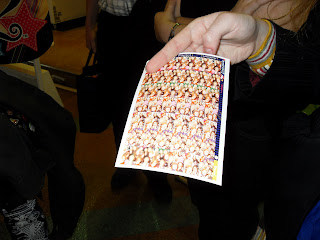 Then BillyChristina showed us her university. We picked the best day to go because it was the Japanese student's graduation day. 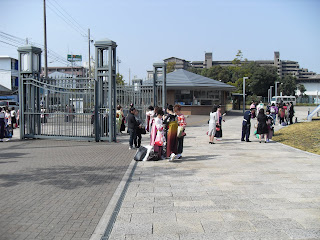 And just like here in the West they wear special clothes for graduation. The boys wear black suits and the girls wear traditional 'Hakama'. Sort of a simplified Kimono. They looked gorgeous. Beats our gowns and mortar boards! 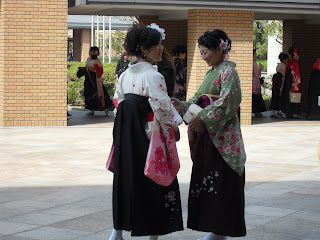 Most if not all of their costumes will be rented. The young people in Japan do not usually wear this kind of clothing except for special events. And sadly, most of the girls do not know how to wear their traditional dress and need a special 'dresser' to help them into their clothes... there is one special occasion where this has caused a bit of an upset... there is a special day every year when the young people who will come of age that year get dressed in traditional costume and go to the town hall to take part in a coming of age ceremony. In recent years it has become traditional for them to rush off to a 'Love Hotel' (rented by the hour) with their g/friend or b/friend before returning home to family festivities. The hotels now employ a 'dresser' because the girls, once out of their costume, couldn't get them back on again!!