- March 31, 2010
Japan is a wonderful contrast between the old and the brand spanking new. They value their history and culture and so ancient buildings are preserved where possible. 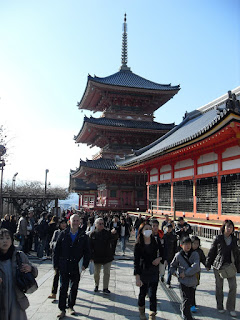 Temples and shrines fall into the old category. 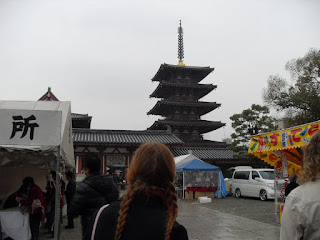 The main two religions in Japan are Shinto and Buddhism. They have a saying that you are born Shinto and die Buddhist. This is because the Shinto religion deals very pragmatically with life but not very well with death. The Buddhist idea of returning lifetimes as lessons on the way to achieving enlightenment is a much nicer prospect and so most religious Japanese combine the two religions. And they co-exist very happily together. 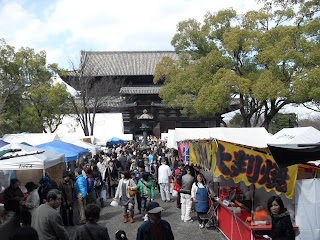 Once a month the Buddhist temple at Toji has a flea market. It was heady with the scents of incense as well as dried fish and strange cooking smells. And also reminiscent of many of the markets that I used to trade at myself. Some things are universal.


It is here that BillyChristina and her friends go to look for second hand kimono's. A new kimono can cost anything from the low hundreds of pounds to a wedding kimono at thousands of pounds. Second hand is obviously a good option. We saw second hand wedding kimono's at about £70 upwards and they were beautiful but even that was way above a student's budget - and BillySteve and I had only allowed ourselves a student's budget for this holiday. 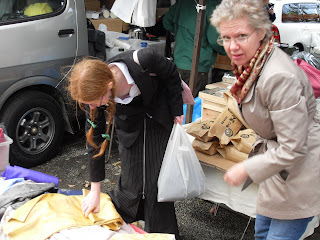 Caught in the act of rummaging!! All the kimono here are thrown onto a tarpaulin on the ground and the prices ranged from around £3 per item up to about £7 per item. Occasionally you come across real silk even in this low price bracket. The girl's were experienced at this... 'check the neck and the sleeves and then the hem' said BillyChristina... that's where the most wear will be. I bought two kimono and an obi (belt) ... this is all silk embroidery.. a little frayed in places... but beautiful all the same. I thought I might make a wall hanging with this. 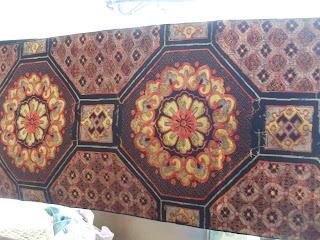 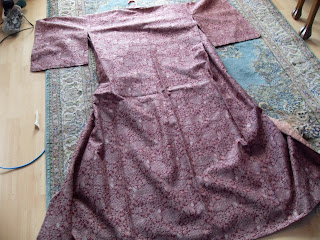 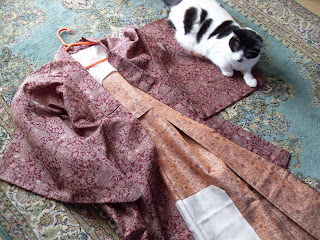 it will be perfect as a dressing gown. I had planned hangings or cushion covers with the other but now I am home I am not so sure... it's fully lined and very heavy.... any ideas what I could do with it? 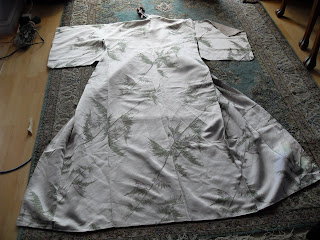 One of the kimono smelled of camphor wood... 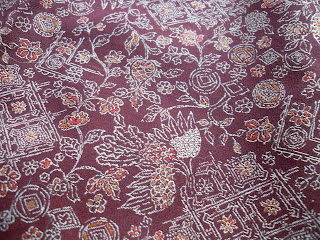 .....it had obviously been stored very carefully in a camphor wood chest, the strong smell keeps moths at bay, the other definitely smelled a bit fusty but a good airing has sorted that out. 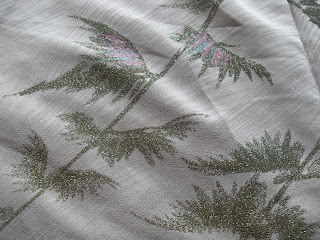 Continuing with the old we visited a Shinto shrine at Fushimi Inari. If anyone has seen the film Memoirs of a Geisha, the scene at the end where she runs through the Torii gates was based on Fushimi Inari... only they recreated it in America rather than filming at Fushimi. 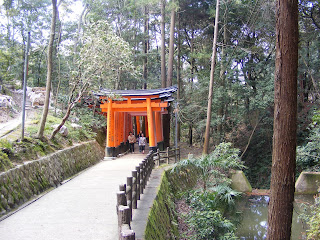 I am not sure that I can explain about Inari. He, She, It, They are a God (more than one) and is often depicted as a fox... but also sometimes as a chinese lion and/or other things too. Apparently most people do not understand it but that doesn't stop them worshiping at Inari's shrines. 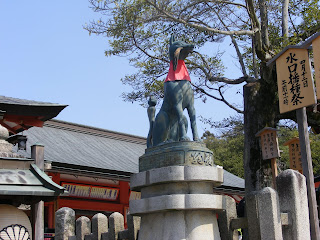 You ring the bell to attract the God's attention and then you clap your hands and ask for what you want and bow... of course you also have to make an offering... a small amount of money or some food and drink. Here's the best bit... there is no need for any of this Christian carry on of asking for peace in the world or for stuff for other people... you ask for what you want for yourself and it is perfectly acceptable to ask for things like... 'please can I win the lottery?' or 'I want to be fabulously wealthy'. Of course you can ask for stuff like peace on earth etc... if you wish, but there is no shame in requesting a long life and lots of money.

You can buy special prayers from the priests. Some are written on wooden tablets and then hung at the shrine, other's can be taken away with you. I bought one for my daughter asking for her to have an easy childbirth.. this will be sent over to spain for her to keep... but she mustn't open it up or the power will disappear. Inside is a piece of paper upon which the prayer has been written by the priest. 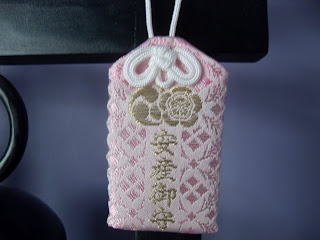 Some people make garlands of origami cranes... a symbol of good fortune, which are then hung at the shrine as an offering. You can see the wooden prayer tablets hanging above them. 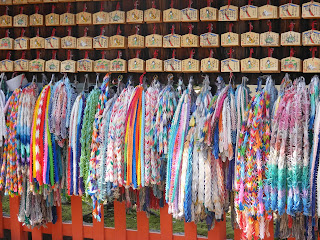 You have to make a thousand crane's within the space of a year for it to work apparently. 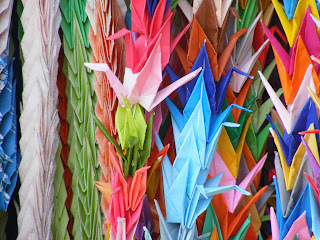 At Fushimi the Torii gates are paid for by business's or individuals or families and the writing on them is usually the name of the business and they stay there until they rot away and then are replaced by new one's... either paid for by the same business or by a new one. 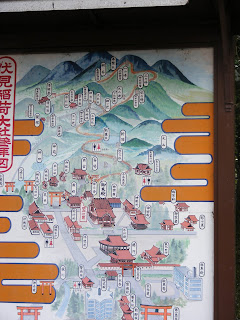 The entire mountain is covered with gates and with little shrines. 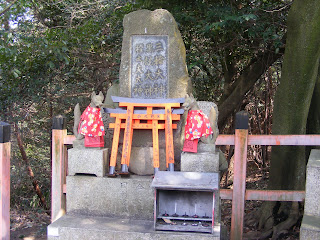 Sometimes families adopt a particular shrine because their prayers have been answered or because Inari visited them in a dream and told them which shrine to worship at... there are hundreds and hundreds of them. There was even a love shrine where prayers dedicated to finding your one true love are left... couples often visit together... or girls on their own. 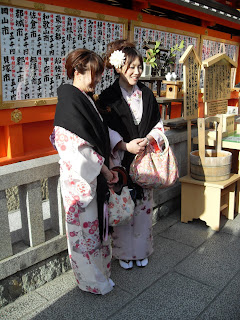 Continuing with the old, we also went to Osaka Castle which was very impressive. 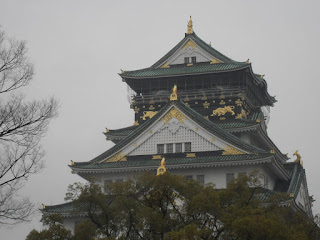 Dating from medieval times, the castle is now mostly reconstructed because it suffered a fire during the 1800's and was also bombed during the second world war, but there were a lot of original bits saved and restored. 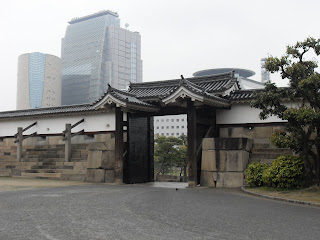 The view from inside the gate shows the modern city beyond and also from the top of the castle. The entire inside has been turned into a museum which is full of original items from early pottery to Samurai armour and swords... very impressive... and of course the gift shop where you can buy limited edition Hello Kitty in ninja costume! 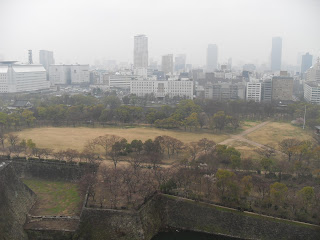 And on to the new.... the Umeda tower's floating garden... sigh... well I am not sure I can do this one justice. The floating garden (which really isnt a garden at all) is 173 metres high reached by a glass elevator that travels up the OUTSIDE of the building and then an escalator which travels through a glass tube up to the floating observatory which hangs suspended between two main towers. 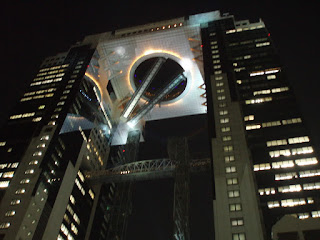 As I suffer from vertigo I had to close my eyes both in the elevator and on the escalator. Once on the floating observatory I was able to sit down and for a short while view the surroundings... oh my goodness. On clear days you can see all the way to the coast in one direction and to the mountains in the other. We viewed at night because the lights are amazing. 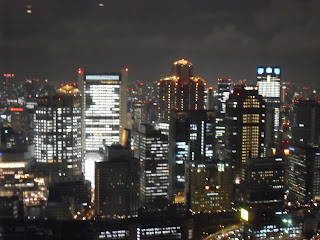 There are a number of 'love seats' available for couples who wish to spend a romantic few minutes together looking out over the city. They also have weddings here too sometimes... I did start to feel quite unwell because of the height and after taking the opportunity to have a special photo... well you gotta do it you know! 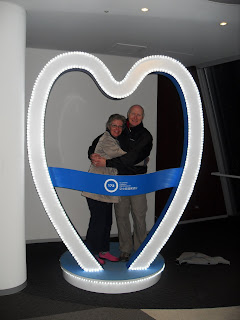 ...I admitted defeat and we descended - with me closing my eyes once again. It took about half an hour for my queasy feelings to disapate. But I was really glad I went....

Tomorrow is almost the end of my tales from Japan... and I have left the best to the end... And I have a giveaway as well... so do pop back!
History holidays Japan life the universe and all that Sewing