The Young Housewife's Counsellor and Friend 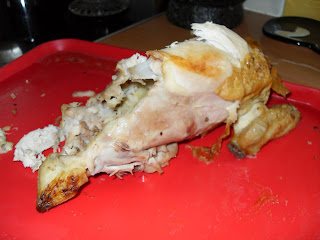 Yes I know it is a roast chicken and last night was a Tuesday. I don't wait for a Sunday to have a roast, in fact I prefer not to spend so much time in the kitchen on a Sunday... so midweek is always when we have the most elaborate meals. Tonight I will have a risotto with the remaining chicken (sometimes I use the left overs in a curry) and make soup with the bones which will do a couple of days at least...

In order to make the chicken go even further I like to make a stuffing for it. Of course sausage meat is traditional but I found an interesting recipe for a very inexpensive stuffing which I have been using for several years now, so I thought I would share it with you. 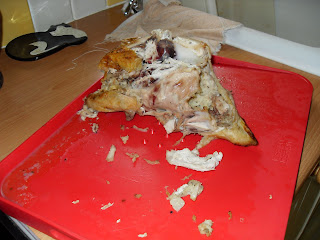 The following recipes come from The Young Housewife's Counsellor and Friend by Mrs Mary Mason and is dated 1876. Mrs Mason was American so some of the recipes in the book are a little different from what we are used to here in the UK but interesting none the less. a full transcript of Mrs Mason's book is available here, I am a bit of a fan of historic cooking and can only say 'well done' to the people at the University of North Carolina who run a project called Documenting the American South.

But I digress... back to the stuffing recipes... I have not tried them all but I think they could be used for any kind of stuffing that will be roasted or baked in the oven... so for the veggies out there... perhaps marrow? I can certainly recommend the stuffing for a goose (even though I put it in a chicken!) 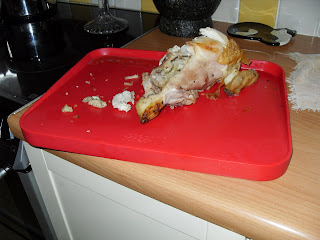 For a Turkey
Bread-crumbs, wet with sweet milk (I added a teaspoon of sugar to a half pint of milk and warmed it through before mixing with sufficient bread crumbs to make a stodge like consistency - although the use of the word 'sweet' does not necessarily mean adding sugar, but could simply mean 'fresh'... I have made this stuffing both with and without sugar in the milk and it is equally delicious!)
A spoonful of butter
One egg
a little thyme, pepper and salt.

For a Ham
A cupful of bread-crumbs, soaked in milk
Six cloves
Six grains of allspice
One stick of cinnamon; all pounded fine
Cayenne pepper a very little
Marjoram
Savory
Thyme
Parsley - each a teaspoonful, rubbed, and sifted fine.
A teaspoonful of melted butter, and an egg, all mixed well together.

Now as you can see the amounts are not really specific so you will need to use your judgement, but basically you mix the stuffing ingredients together and then fill the cavity of the bird. Or I suppose you could roll the ham in it to make a coating, or fill the vegetable cavity and then simply roast. It does assume a certain knowledge of cooking since I am sure that the ham would need to be boiled first and then the stuffing applied and finished off in the oven. It would be perfect for stuffing vegetables because it does not require a very long roasting or baking time since it is mostly breadcrumbs and milk. I can honestly say that after being roasted inside the bird it is not really obvious that it is simply breadcrumbs and milk... I sometimes add a little onion sweated down in butter too. Delicious!
Cooking History