- February 26, 2010
My father is still in the early stages of coping with his recent bereavement. And I am very proud of the way he has approached his current situation with a very positive attitude. He is still working in the office of a local stonemasons and he still has a lively social network of friends, regular visits to the golf club, British Legion, church etc... he will be 87 in the summer and in good health, so far. I am most anxious that he not go downhill now that he is on his own... and I am several hundred miles away from him and unable to visit very easily.... so I am kinda doing bereavement counselling-friendship-daughter stuff over the phone... 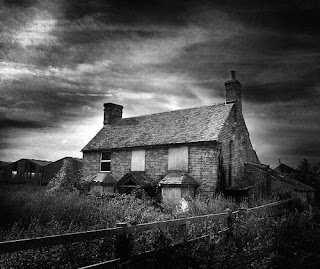 ....at the moment one of his main difficultys is in coming home to an empty house. He is mostly fine when he is out and about doing stuff and once he is home and watching tv or getting on with chores he is ok... it's just the moment he opens the door to a house that is obviously missing someone... that gets him.

To try and help with this. I told him that he had to make the place more like his own little pad. We laughed about how he was single again and perhaps would want to invite a lady round... (not that he would but he does enjoy female company!) 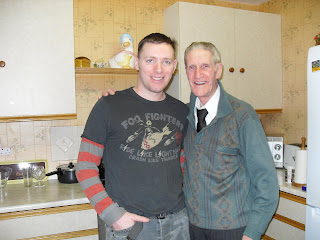 You see the decor was all chosen by my step-mother - well it's true, mostly the wife picks what she wants and the hubby goes along with it. The pictures on the walls are all her choice too. I suggested that he remove one of the pictures and replace it with something he has chosen himself. Well, he must have thought about this because he told me last night that he now has an original painting of an old man fishing, painted by a local artist, hanging above his fireplace. Wow! Says I... did it cost you much? No, it was totally free.

The Elgin library will lend works of art by local artists for three months at a time and you can take out a total of two pictures per person. My father chose the chap fishing because he liked it. And now he says that it has changed the whole aspect of the room, and he is actually quite amazed at the difference it makes. He is going to choose a second one for the hallway. He reckons it will do until he finds something he wants to buy... or he may just keep going back and borrowing a different one. 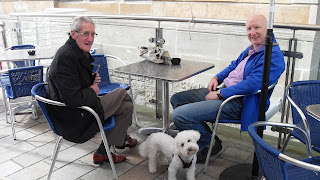