- February 18, 2010
OK... I am back. I arrived home on Tuesday evening absolutely exhausted. It has taken me a day to sort myself out and get the house back the way I like it. Apologies to the male members of the Billy household but that level of dust is just not acceptable!

Funerals are not supposed to be happy occasions, however, there is often a feeling of pleasure in a service or ceremony 'well done' or 'fitting' for the occasion. We call it a 'good send off'. My step-mother's funeral was not one of those occasions. The trouble is, as I think is common in a lot of familys, there are family factions and emotions run deep and of course at such an event as a funeral, the emotions are stretched as taut as an over-tightened guitar string and one wrong move is apt to produce an enormous discordant 'twang'. 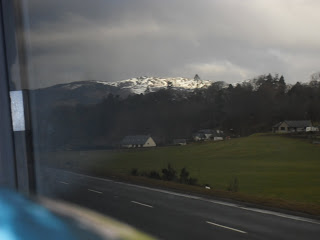 Well TWANG it did!! One of the long-standing tensions in our family centres around my step-sister. A difficult personality (putting it in the kindest way possible) who is almost always at the root of any family row. Whereas the rest of the siblings have, like me, moved away, made a life for themselves and their family... the one sister just didn't seem able to leave her mother, ever. It caused a great deal of friction between husband and wife over the years until my father had to accept that she would be a thorn in his side forever and because of his love and devotion to his wife, he let it be and often played second fiddle to a daughter who should have known better and left them in peace. Anyway...

By the time I managed to get up to Scotland, the announcement of the funeral had already been put in the newspaper. It said that the funeral was private 'at her own request'. My father was, as you can imagine, in a very emotional state and was so browbeaten that he accepted, against his own better judgement, that my step sister knew what her mother had wanted. However it was not clear what exactly is meant by a 'private' funeral. Close family only? Well with three children and two step children and umpty umpty grandchildren (most with partners... and ex-partners not to mention the children from the other side of the bed sheets!) that's a lot of people who all feel they have a right to be there - moreover they all wanted to be there. 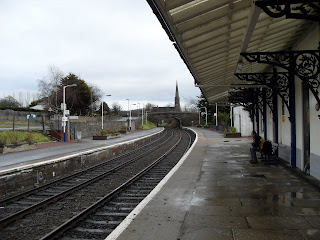 Instantly this notion of a 'private' funeral caused rows as to who was, or who was not, welcome at the service. More distant family members, who wished to attend, in order to support my father felt unwelcome... the hardy turned up in spite of this. My step-mother had lived in the same town for most of her 83 years and had a lot of friends... who would have liked to have come to say goodbye... all of whom now felt they had been snubbed. Even worse, the entry in the paper had mentioned that my step-mother had three children... no mention of the two step-children - in spite of the fact that we have been in the family for 40 years!! This caused more than a few family members to mutter (myself included). 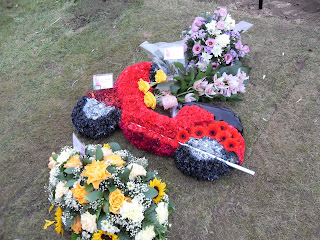 I had asked my father about flowers only to be told that we were to contribute to a single wreath in the shape of a scooter (my step mother used to ride a scooter and it was one of her most favourite things in life)... when I arrived my father informed me that the wreath was already paid for by my step-sister and that we did not need to contribute.

On top of this three yellow roses were to be placed on the coffin from her 'three' children... again no mention of myself or my brother. Well this kind of got up my nose a bit. I mean, I first met my step-mother when I was 13 years old... surely I could be included as one of the children. I arranged a red rose from my brother and I to go onto the coffin. 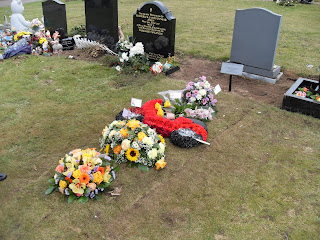 The final and main bone of contention was that my father chose two pieces of music for the service. Amazing Grace (the bagpipe version) for the moment when the minister would ask everyone to reflect on their own memories of my step-mother, and Unchained Melody for when the coffin was taken out - this being 'their tune'. Apparently, according to my step-sister, her mother had requested 'Spirit in the Sky' to be played instead of Amazing Grace. My father was aghast... even if she had requested this particular song, it seemed very inappropriate. He decided that it must have been a joke, my step-mother had a very keen sense of humour, and replied that Spirit in the Sky was a definite NO! 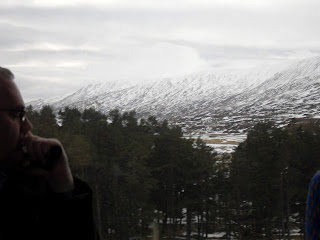 Well.... from that moment on the whole family was dreading a 'scene'. My step-sister refused to come in the car with us and in fact did not even come to see me before the funeral... she arranged her own transport and in the family room at the chapel before the service pointedly ignored me... turning her face away from me. I carried on regardless taking her hand in greeting. She also ignored my father which was extremely bad form. Between the chapel and the graveside she managed to get lost so that everyone waited on a freezing cold hill top for her and her husband to arrive. The question crossing all of our minds... how long do we wait? Should we start without her? And since her husband was assigned one of the cords, who would take his place?

Finally after frantic mobile phone calls from her son, she arrived. Everyone simply turned away from her, thankful to be able to get the deed done.

In spite of my step-sister's insistance on no flowers other than the communal wreath... some family members had sent flowers and there were even flowers from friends of my step-sister (!!) ... this, then annoyed other family and friends who were told not to send any. Some people who had phoned my father to ask if they could come to the funeral were told that they were most welcome and so had turned up... leaving other's who had simply read in the paper that it was 'private' feeling very upset. All in all, it was a lesson in how NOT to organise a funeral...

Before leaving, I begged my father to write down very carefully, absolutely every detail that he would want at his own 'send off' so that we can avoid this kind of trauma in the future. He agreed that it would be a good idea, but then said that it was 'all too final'.

I don't know what you all think about on this topic but I am writing down what I want at mine right now... I can always change it as I get older if I want to...
Chit Chat Family History life the universe and all that