- February 02, 2010
On the walk from the carpark to the hospital in Granada the road was lined with Orange trees heavy with fruit. Some fruits had already fallen onto the ground. Most were ignored by all the passers by. I suppose everyone had orange trees in their gardens or on balconies and the fruit is so common no one cared about harvesting the fruit from trees in the public parks and gardens. 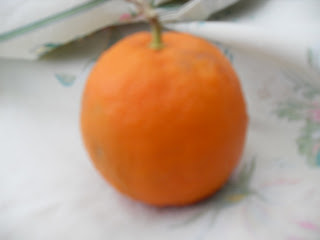 Except for me that is. Actually I picked one orange from the ground beneath the tree and another from the tree itself. These I packed carefully in my suitcase and brought home. Now, what to do with them? I could simply have eaten them... but I felt the need to mark the occasion and so I decided to make Elizabethan Pommanders - if made correctly they can last for hundreds of years and I thought it would be a nice thing to give as a present to my daughter and grand daughter (when she arrives!).

I haven't made a pommander like this since I was a child... but its not something you forget. First of all you need some ribbon, the oranges of course and some cloves. Orris root is useful if you can get it - but when I was a child we simply hung them up in the airing cupboard for a few months and they dried beautifully. 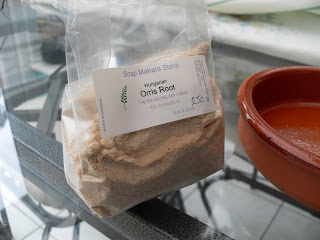 I don't have an airing cupboard in this house but I do have some Orris Root - the best before date on it was 2007 but I really don't think it will make a difference. 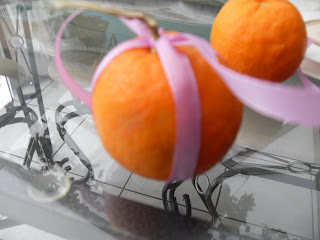 First of all I tied the ribbon around the orange. I secured it with a couple of pins. 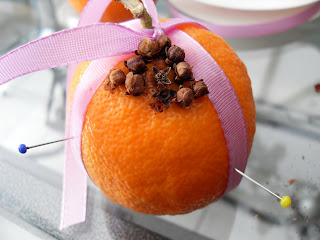 Then I began pushing the cloves into the skin of the orange. This soon becomes painful on your fingers and thumb I can tell you! You could try making holes in the orange with a darning needle first or you could wear a plaster on your thumb or one of those nobbly rubber finger-end things that you see for sale in the post office. The first orange was very juicy and very soft and was very much out of shape by the time I finished, but the second slightly smaller orange was less juicy and held its shape better. I also found it easier to space the cloves more evenly on this one. I didn't bother doing anything very fancy with the cloves - I remember we used to put our initials on our pommanders or designs such as stars and circles. 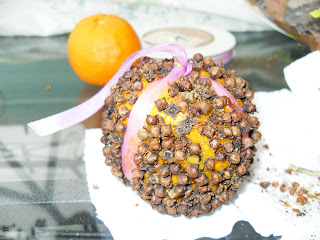 Once the cloves were all in place I covered the oranges with the Orris root. At this point you can add ground cinnamon too if you wish, but I think its a bit unnecessary. Orris root powder comes from the European Iris bulb - which is ground. It draws moistures from the orange thereby assisting it to dry out. It also has a slightly sweet aroma. You can buy it online from several suppliers but it can be quite expensive. I think ebay would be the most economical place to get it if you are watching the pennies.

I have placed my pommanders in the conservatory. Its fairly warm there but more importantly its very dry. You could wrap them in greaseproof paper and put them in a cardboard shoe box and then place them on top of a wardrobe or somewhere like that - the end result should be the same. I am not sure how long they will take to fully dry out but I am hoping they will be ready by the beginning of May when my grand daughter will be born. As they dry out they shrink and the ribbon will need replacing. I will choose a fancy ribbon or perhaps some narrow lace and I may even put a tassle underneath. Whatever I do, I will take photographs and put it on my blog for you to see. 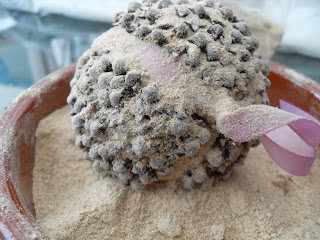 January is Seville Orange season and although I am a little late doing this, I am sure there will still be some Seville oranges in the supermarket just waiting to be immortalised in cloves, if you fancy making some for next Christmas. Oranges and Cloves are more often associated with Christmas, but they make wonderful moth deterrents in the wardrobe or for scenting woolly jumpers in the drawer. The Elizabethans were a little frugal with washing and wore pommanders around their waist or on necklaces - there was a belief that the strong scent would ward off diseases too. 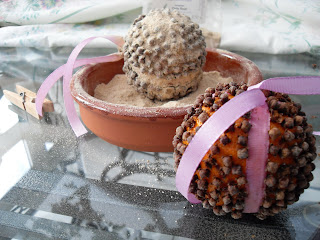 You can do the same thing with Lemons or Limes and they are a nice size for hanging on the Christmas tree or making into a seasonal wreath for the door. Too early to be thinking of Christmas? OK lets just think of them as moth deterrents for next winter!
Crafts Family History