- January 24, 2010
I am sooooo sorry for leaving you all on such a cliff hanger. Well it's good news! The surgeons gave Sarah a 50:50 chance of surviving the five hour surgery - and she did!!! They are very happy with her, they removed all the clotting and the prognosis is good. I heard the news at Gatwick when my husband met me off the plane from Inverness... we transferred quickly to a flight to Madrid - which was delayed and finally landed in Spain around 10pm. We then found our hotel (tired... anxious, pissed off... long story... but we finally got there!) and had four hours sleep before returning to the airport for our connecting flight to Granada.

When my son in law (and his parents who had driven down from the south of france - 17 hour drive with no stopover) met us at the airport we discovered that visiting times are strictly adhered to, and it's half an hour from 1:30pm to 2pm and then again at 5:30pm to 6pm... and only two people allowed at the bedside. By the time I saw her I was really really tired. As you can imagine it was a strained and anxious wait for visiting time.

She was awake but very drowsy and spaced out. Her head has been shaved into a broad Alice Band along the front. We are not allowed to take photographs in intensive care which was a little sad because when she is fit and well she will be keen to see what she looked like. Her face was very swollen but she was able to speak... a little... after the 'event' she lost the power of speach and control of the left side of her body but this has now returned... but she really was confused and just repeated the word "yes" to every question we asked. It was very very upsetting and I could not stay very long at her side. I was tired, very little sleep for three days must have contributed but I was so worried that she had suffered some brain damage. 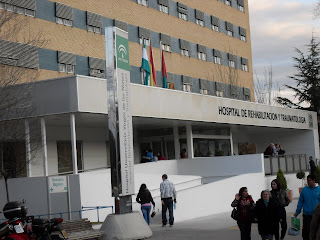 It felt really strange being in my daughter's house (which I haven't seen before, since they moved here from Mallorca a year ago) without her here to show me around... it was a difficult day and one I hope never to experience again. And if you want to know why she and her husband choose to live in such a remote place (Sierra Nevada) an hour and a half from Granada and the hospital... just have a look at the view from her sitting room window and then you will understand. 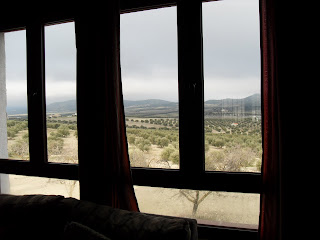 Today (Sunday) has been BRILLIANT!!! When we went in to see her she was able to talk much better... she is still a bit groggy and has trouble with some words... a little gobbledy gook coming out instead... but it was very clear that she is all there... inside I mean. I worried so much that something of the amazing, funny, intelligent girl I knew would have gone... I don't think it has, and I thank all of you wonderful people for your prayers and positive thoughts... they help... I just know they do! 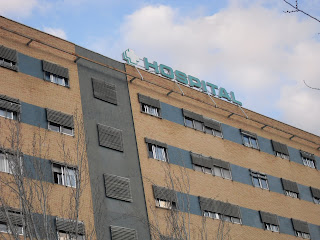 Here is a picture of Sarah in recent happy times. At the moment she is badly swollen and the top part of her face is bruised purple. She looks like something from the film Avatar. I kid you not! 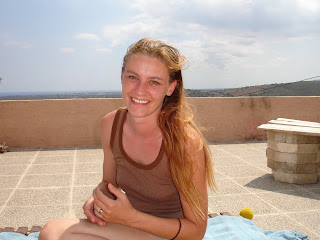 Sarah is fluent in Spanish and English and speaks very good French and German. To lose the power of speach for her would be extremely frustrating. I said to her that I thought she must be really frustrated not being able to speak and she nodded and I could see from her eyes that she understood everything I had said and was still the same Sarah. I can't tell you the relief I felt. I did ask her if the nurses spoke Spanish to her or English. She wasn't able to say, we think she understands everything, but just doesn't know which language it is in and we are speculating as to whether she will confuse the languages as she learns to speak again.

This is the parents and parents in law. We have just come from the hospital, all happy that Sarah is on the mend, and celebrating by having a McDonalds (! nearest place to eat!) - and believe it or not but this is the first time Sarah's mother in law has ever had a McDonalds! 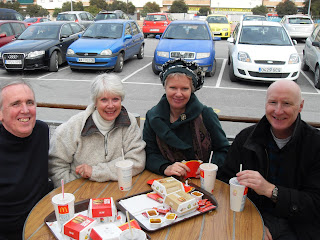 Yes we have challenges ahead, she has to learn to speak again, we are not sure if there will be a weakness on the left side of her body or not, baby will be born late April or early May by C section and we hope that she will be well enough to cope, but we are taking each day as it comes. Big thumbs up for the amazing neurosurgeons at University Hospital de Traumatologia, Granada. They saved her life and that of my grandchild.

And finally... just before we left her I put my hand onto her tummy where my little grand-daughter is growing and said hello to her. She kicked me back fiercely. All prayers have been answered! Thank you thank you thank you.
Family