- January 28, 2010
The snow stayed only one day and the roads cleared very quickly. The La Mora Pass still had snow around the edges but with the sun out that is thankfully disappearing fast. The drive to Granada is long enough without the worry of the snow.


Sarah continues to improve on a daily basis and it is now becoming apparent how much damage has been done. There are gaps in her memory and she has lost a lot of words and communication skills. She repeats a lot of what you say to her... sometimes it is a clue that she hasn't understood the sentence, but other times she has understood and is just repeating it. We know that she is in there and we don't want to patronise her by treating her as if she were stupid... but it's difficult to talk normally when you are constantly checking to see if she has understood.

Her Spanish language almost totally disappeared yesterday but today she was understanding Spanish. When asked if the doctors had spoken to her she said yes but then was unable to tell us what they had said. The whole language thing is very random and very strange... if it were not my daughter this was happening to I think I would be fascinated by it. For example... when asked what kind of drink she would like with her McDonalds (yes McDonalds again...!) she responded "A fried one"... then she pulled a face because she knew that wasn't the correct name for the drink she wanted... we then said Fanta? And she said YES!!! and laughed. Lots of random things keep coming into conversation... letters and numbers and when asked what she means... she shrugs her shoulders. I guess we shall just have to be patient and wait. 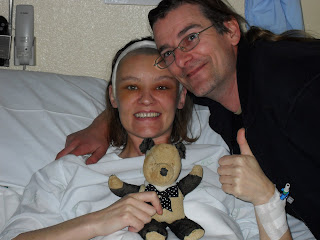 She laughs a lot... I guess she has little choice. We have tried to reassure her about what has happened to her and that everything is now fine but I suspect that she forgets what we have said to her. The stitches come out tomorrow and we are hoping that she will be allowed home soon. The best part of today was when she tasted a pineapple and then remembered the last time she had eaten pineapple... her conversation suddenly became very fluent. We think her speach will improve a lot once she is home with familiar things around her. The main thing is... she is still with us and everything that she appears to have lost is re-learnable... language, reading, writing etc. But boy is she going to get frustrated!

Oh and on the way back from the hospital we saw this....

It's a bit blurry I know, sorry about that. It's a row of houses built to look like sand castles! And I thought an Englishman's home was his castle!
Family