- January 07, 2010
A little bit of snow and people start reminiscing about past winters and snowfalls of their childhood... and I am no different really. I do get annoyed when I hear on the news comparisons of this little freeze we are having with the winters of 1977/78 and 1963. I suppose it does depend upon where you were living at the time but for me, this is nothing, compared with those times. 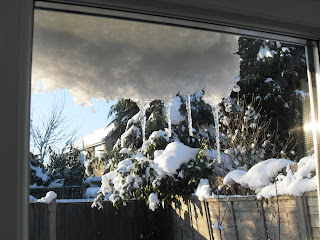 In 1963 I lived in Cornwall. Our house had no central heating - a wood/coke burning stove in the kitchen and a coal fire in the sitting room and a movable paraffin heater. I remember opening the back door to look for the two pints of milk which would normally be sat on the doorstep waiting for us only to see a complete wall of snow that reached up to the top of the door jamb. And my mother saying "I don't suppose the milk man has been then!" My poor mother, she suffered badly with asthma and after a phone call to the doctor (made from a public phone booth which was a good 1/4 mile's trek from the house) a hospital visit was arranged and since the roads were impassable, a helicopter was sent from nearby RAF St Morgan. It was very exciting for us kids, the helicopter landed in the playing field that was behind our house and my mother was carried out and placed in it amid a pile of blankets. Unfotunately the helicopter was unable to start it's engines again because of the extreme cold and after half an hour freezing inside it my mother was carried back into the house and the trip was declared a no-go! The doctor arrived later that day having walked five miles in the snow to give my mother a life saving injection. The helicopter sat there for five days until the thaw. 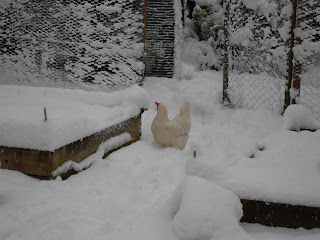 In December 1977 I lived with my father and step mother (alas the asthma got my mother in the end) in Invergordon which is north of Inverness, Scotland. My first baby was due on 23rd December and so I was quite heavily pregnant. The hospital in Inverness was a two hour drive away, there was a hospital nearer but it was classed as a cottage hospital and would not take first time mum's or complicated pregnancies. I was lucky, my little girl arrived early, on the 9th and so I did not have to worry about that trip. By the time the 23rd came I was back at home and the snows had arrived. The roads were blocked, the snow reached up to our windowsill. The post lady who I always remember, Anna Black she was called, practically swam her way up our path to deliver a letter and gave my father such a telling off for not clearing the path. 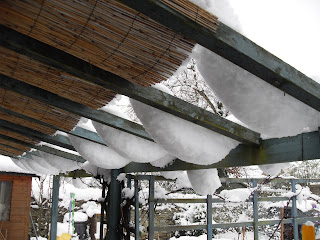 That year we also had to put up with power cuts too so we learned to always keep a couple of thermos flasks full of hot water just in case. As soon as the power goes off the first thing you want is a cup of tea! We had a camping stove for cooking should we need to, but I seem to remember that we cooked large pot fulls of stews and soups which we could heat up on the camping stove when necessary. Oh oh someone would say and then flick the light switch and we would all watch the light bulb... nothing. We never knew how long the cut would last so out would come candles and matches at the ready. We would stop whatever we were doing and gather together in the sitting room around the paraffin heater and with our thermos tea in our hands a feeling of almost 'holidays' would descend and my father would start to tell stories of what it was like during the war. Or if it was at night, a ghost story. And for a brief while we would all feel a sense of togetherness and like a real family made closer by adversity. 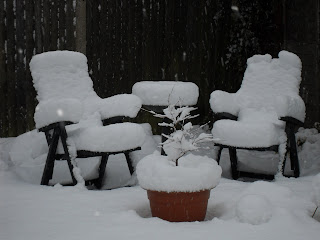 This morning I watched the hens for the second day confining themselves to their cage... the door is open... they simply don't want to come out. Except for Eggy who like the Marco Polo of the chicken world has tracked around the entire garden wading through the snow which in places comes up her skirts almost to her neck. The snow has made interesting shapes and patterns in the garden and casts a strange light into the house... blue light at twilight and yesterday evening I could see all the way to the henhouse without any artificial light at all... 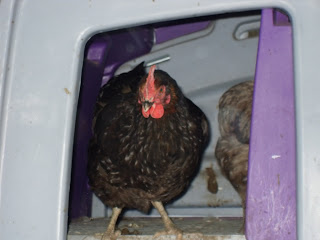 The outside world is quiet. There is no hum of traffic from the A40. What noise there is in the village seems to be muffled by the thick blanket of snow. The two shops in the village have run out of bread and milk as people panic buy not knowing how long this will last. The television is full of comparisons to previous winter's and the salt and grit are running out making it unlikely that minor roads will get cleared at all. With a freezer full of leftovers, central heating working fine, hens still laying eggs... we won't starve or go to bed cold with our coats spread across our toes for extra warmth. Nah... this is nothing like the real harsh winters of 63 or 77/78.
Chickens History Snow Weather