- January 05, 2010
One of the reasons that Christmas was so flat for me this year has to be that my youngest daughter was not at home. Although at university near Osaka she spent Christmas in Tokyo with her Canadian friend. Here is a few excerpts of what they got up to...

We got packed, said goodbye to people, got down to the bus stop... and realised someone had misread the time on our night bus tickets. So we didn't have two and a bit hours to get to Kyoto Station, we had one. This is a journey that takes an hour and a half. On a good day. We DID miss the bus, but thankfully (Mainly, I think, due to our blank expressions of non-understanding) the guy in the ticket office was able to get us tickets on the next one, and thus we embarked on a long night of much cramp and little sleep, a little later than planned, but overall it could have been worse. ---

Day two started EARLY. I quickly found myself in charge of navigation (I took one look at the Tokyo Metro map and wept happy tears of familiarity. Once you've navigated the London Underground, apparantly, you are sorted for every subway in the world) as Katie had never been on an underground train before coming to Japan, and hadn't yet mastered the skill of working out quickest-route-with-least-number-of-tran
sfers (Although she'd got it down okay by the time we left, which just goes to show).

We ended up breakfasting in Starbucks (See? See how the colonials have corrupted me.) before dropping off our bags at the hostel (Surprisingly good for the money, although we did end up sharing the room with two guys who snored like a goddamn tractor) and heading to our first stop - Tokyo Tower. 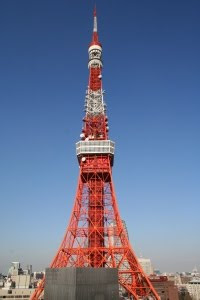 It was pretty awesome, as it was INCREDIBLY clear and we could see all the way to Fuji-san. My vertigo waited until we were on the special observation deck to kick in, which was, y'know, nice. It wasn't quite as bad as it was in the lifts for the Umeda Sky Building, but why does every Japanese engineer think 'Oh look, an incredibly tall building, clearly it needs glass lifts!'

Day three started off brilliantly as it was the Emperor's birthday. This meant that we got to pile into the Imperial palace and wave little hinamaru flags at a tiny Imperial family on a very small, very far away balcony. I didn't expect this to be so awesome. 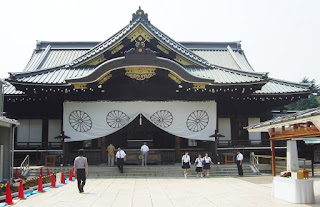 We decided, for no particular reason, to go to Yasukuni Jinja... because it's interesting, and it's there. We got out of the station, heard people on loud speakers, remembered that it's the Emperor's birthday and it's a Nationalist shrine and decided to go get lunch and see if they'd calm down. Luckily, as we returned, there were several big black vans pulling away, so we missed most of it (Although there was what looked like a father and his son in WWII reproduction uniforms. I wonder if they knew that the two gaijin actually found this incredibly amusing, rather than offensive or threatening in any way). The shrine itself was nice, and had a Noh stage. The museum was... interesting. I DID have to be dragged away from the fighter planes, and Katie didn't really believe me when I told her that a naginata was a woman's weapon, and then we got onto the 20th century and started actually reading the signs and at this point I started wanted to beat my head against the glass cases.

They had lots of nice uniforms, though. 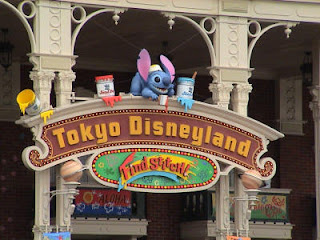 Day four was the start of DISNEY LAND. For this reason, I'm going to lump days five and six in here as well, as it was pretty much all par for the course and I struggle to remember what happened on which day.

We spent the first day in Disney Sea and the next two in Disney Land. We ate an awful lot of junk food, which was good because it was Western style junk food, largely, and I do miss my Western style junk food. Katie talked me into going on most of the rides I swore I wouldn't, including Space Mountain, which successfully conquered my deep seated fear of big rides established the first and only time I went to Disney Land at age eight. She did not get me on Splash Mountain, as we have established beyond shadow of a doubt that I just plain hate those things. On the other hand, I DID get Katie on Star Tours, which I love, when simulators make her sick. We are so ill suited as theme park buddies it's just ridiculous.

The Haunted Manor was done up in a Nightmare Before Christmas theme. We rode it twice, and I'd have done it a third time.

The parades (Or boats, in Disney Sea's case) were epic, and we got to see fireworks, and we also went character stalking, and I got my photo taken with Jack Sparrow. AND Scrooge McDuck. AND the Mad Hatter. AND Robin Hood. AND Captain Hook. I passed over Cinderella, Wendy, Alice, and Sleeping Beauty. I think this says far too much about my relationship with Disney, or rather lack there of.

The only real problem with Disney was that in Japan, it's a couple's place. Which meant that Katie and I occasionally got strange looks. Meh.

Day five was Christmas Day, incidentally, and did not feel anything like it. Sadness.

Day seven was the Studio Ghibli museum The museum itself is more like someone renevated a house and went crazy, because it's entirely possible to get pleasantly lost for about thirty seconds at any one point. The weirdest thing was that it was like they'd revenated an old French or English house, and there was wood panelling and leaded windows and all these other little things that made me feel pleasantly nostalgic, but probably were novel and strange for the Japanese visitors. At least it was good enough to fool me, which means they were doing something right. 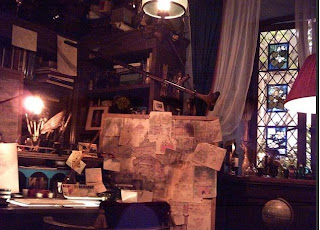 We got to see a short film called 'Mei and the Kitten Bus', which I thoroughly enjoyed, and they had all the desks laid out like the different members of staff were working in this beautiful old house and had just left their desks for a moment, so you could see what all the different stages of development were, and they had a dark room explaining the principle of animation by using kinetiscopes and spinning models and strobe lights and a gigantic exploded brass projector in a glass case, and there was a big temporary exhibit on Ponyo, which at this rate I will get to see in cinemas when I get home, and they had all the layout sketches bound into volumes like telephone directories and stacked up in the middle of one of the rooms, and I couldn't see over the damn things. I loved the whole place so much, and I really wish they'd let you take pictures because I would have taken pictures of EVERYTHING.

Day nine, we went to Comiket. 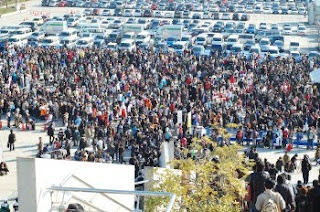 Comiket was not actually that much fun. For one thing, it was too damn big. For another, there were too many goddamn people. Queues everywhere. It was terrifying, and difficult to navigate, and we got lost many times. And I wasn't allowed to take pictures of the cosplayers except in the cosplay square, which was... unnerving, because it was full of guys with BIG CAMERAS. This was the first time I've ever seen like, twenty guys crowded round one girl in cosplay, and it's exactly as weird and creepy and wrong as I expected it would be.

Day ten was our last day in Tokyo. We stowed our bags in lockers at Tokyo station and set out to tie up our loose ends.

Loose end no. one was the 47 Ronin grave, which was suitably awesome and actually quite busy. 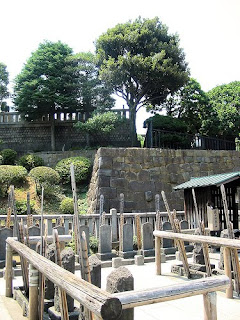 And after all that news I feel so much better!
Family Festivals holidays Japan