- January 13, 2010
Of course I am talking about the snow. The first day it's exciting and a bit scary if you are out and about and the roads are getting blocked. Then it starts to feel a little bit like the end of the world when the bread and milk run out at the supermarket... and then you bunker down for what promises to be a long wait for the thaw... and then.... and then... well it's really just too much!!!! It's snowing AGAIN!!! 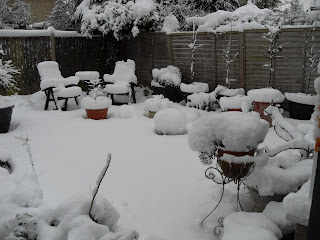 Being pretty much confined to the house and having finished all the frantic knitting projects for Christmas presents I am now suffering knitting withdrawal symptoms. So I thought first I would show you ALL the socks I knitted as gifts (did I hear someone mutter... boring... ? Pipe down! It's my blog....) 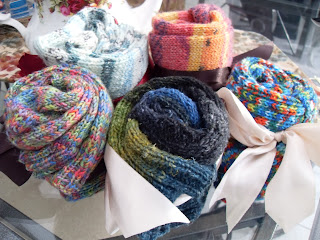 ....and then I thought I would show you the 'multi-colour dream socks' that I made with all the little left over bits of wool. 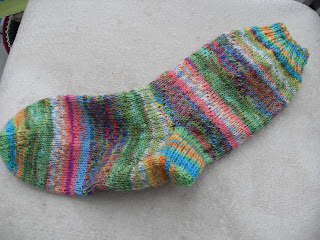 Pretty cool eh? I am about to start on a twin for that sock but of course it will not be exactly the same... I kept back a little of the same wool that I used on the rib, heel and toe so that I can do the same on the second sock but the rest will be simply whichever odd bit of wool my hand picks up out of the wool basket! 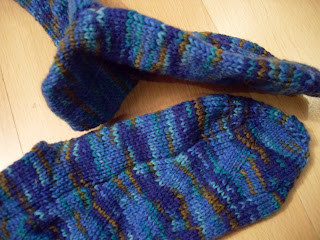 Now this is perhaps taking things a little bit far but although I know I told you how I thought very carefully about which socks and which colours I made for each person, what I didn't tell you was how much of a spiritual exercise the whole sock knitting thing was. Spiritual? Well yes... in a way. 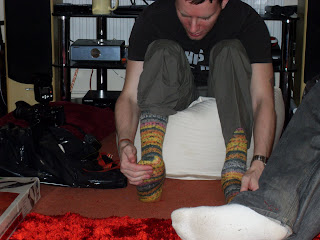 You see I learned to knit first from my mother when I was just tiny tiny... then she died and I only occasionally took up the needles after that... with almost no success, so for years I told people that I really couldn't knit. Anyway... as I was knitting my thoughts turned so often to my mother and how I watched her knit when I was a child. 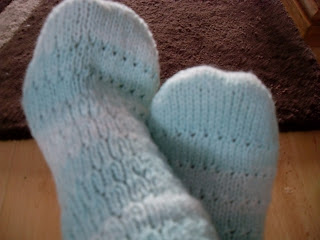 She counted the stitches on the needles in pairs and her lips would move even when she counted in her head. I found myself doing the same thing. It made me feel very close to her but at the same time so very sad that she is not here. When my mother was knitting her needles clacked and clicked as she worked so fast... I was a bit sad that even when I seemed to get up to speed my needles didn't click or clack, until I knitted a pair on a different sized needle (a metal needle rather than the bamboo one's I had been using before) and there it was... the reassuring click clack. It made me smile as though she were somehow there in the room with me. 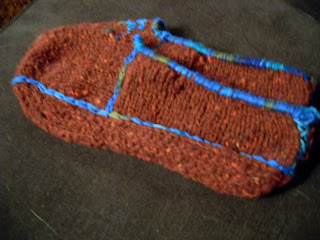 On one particular sock I went wrong so many times I resorted to Ravelry to ask for help. There were some very kind responses that helped me enormously but it was my lack of experience that had made me go wrong and I began to feel rather stupid when it became obvious to anyone who read my posts... and I suddenly found myself crying and wishing my mum was here because she would have put me straight right away. You would think I had come to terms with her loss by now... she died forty years ago. 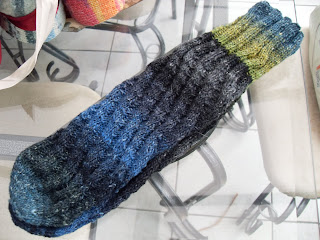 This pair above are one of my favourites - knitted for my son in law (who does appreciate them) and made using the most expensive wool that I bought... a hand died, silk wool blend and I thought the spiral pattern looked so good I am going to knit another pair for myself just like this. The only down side of this pattern is that my fingers were inclined to cramp up after an hour or two of knitting.

A couple of the socks were gifts for people who I knew would not appreciate the amount of work that went into them... I told myself (and I told all of you too) that it didn't matter, I enjoyed knitting the socks, well it's true I did enjoy it but I found that it did matter after all... 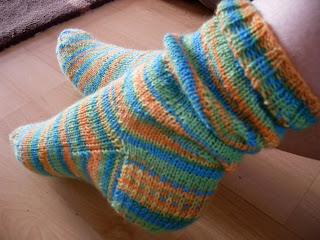 ....and I shall not bother making them anything next year... I tried not to feel hurt when I saw they didn't like them. 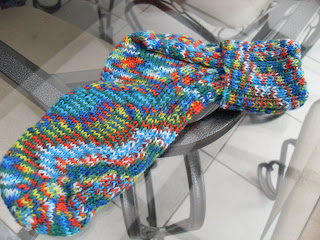 The multi-coloured dream socks are not for Joseph but for PhillyBilly... and he LOVES the knitted socks I have made for him... these will be the third pair I have made him. He feels kinda cool and 'eco-warrior' like when he wears them... not that anyone sees them with his jeans pulled down so far that they wrinkle around his ankles. It's a bit funny actually... he's too cool for a coat... wears three hoodies, one on top of the other, a pair of sweat pants under his jeans and the crotch of his jeans midway down his calf. But he is so long in the body that it reveals his underpants as he walks... which is all very well when it's summer time but it's SNOWING for goodness sake!!!!!
Chit Chat Clothes Family History knitting Snow Weather