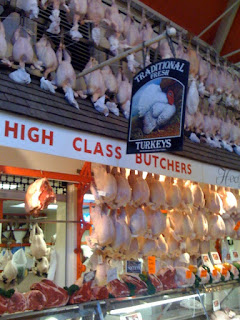 This is the butchers in Oxford's Covered Market. It looks fabulous doesn't it? Well I guess it doesn't if you are a vegetarian. But even when I was a vegetarian I loved it. It's because of the history of the place. The market opened in November of 1774 and is still going strong today, except I think it may have changed a little bit, though looking at the butchers shop pictures you wouldn't think so!

The market is purpose built because the people of Oxford objected to the untidiness of all the market stalls in the streets and so a special covered area was commissioned to house the stalls. The stalls soon became permanent shops but the whole place has retained the feel of a market. Initially the market sold only meat, it began with twenty butchers shops like the one above, which is the only one remaining. 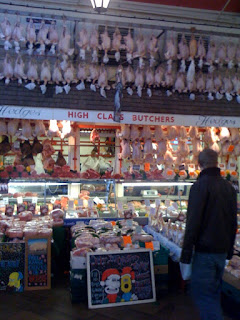 These little snowmen below (if that's what they are) are made entirely of fruit and vegetables..., it's a grapefruit with an orange on top and baby sweetcorn for the nose, sultanas for the eyes and courgette slices cut into a crown and red pepper strips for the mouths and leek strips as a scarf. The whole thing dusted in icing sugar or flour (couldn't tell which)... someone spent a long time making them... the whole window was lined with them. 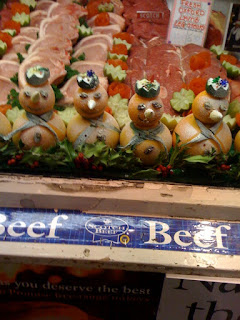 This butcher also specialises in wild boar sausages - I have heard alot about them but never tried them, I think they are only in season in late summer. Here he has some oak smoked hams hanging... they look amazing, but I suspect that my teeth wouldn't cope with eating this sort of thing (don't get me started on my teeth!!). 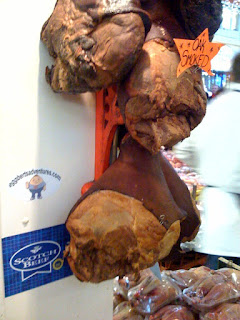 Nowadays there are numerous different shops in the market selling food and drink, clothes, leather work, jewellery and gifts and my favourite one.......... 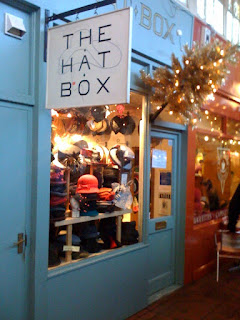 It's so petite inside...just like a hat box! Alas I had no money for hats today. But it was nice to look.
Chickens Chit Chat Cooking Festivals