So that's what that is for!!

- November 20, 2009
Decided to make muffins today as a gift for BillyJon tomorrow when we go to visit him - he's managed to break the cat flap on his door and needs a hand to fix a new one - firstly, I ran out of muffin cases and the only one's available in the whole of the village were enormous. So not daunted, I squashed the enormous ones a bit so that they fit nicely into the tins and proceeded anyway.

Made the first batch - blueberry ones... yum...... started the second batch only to discover that I had run out of baking powder. I had plenty bicarbonate of soda but no baking powder... are they the same thing I have often wondered? A little investigation on the internet (marvellous thing, couldn't live without it!) and I discovered that they are not interchangeable. 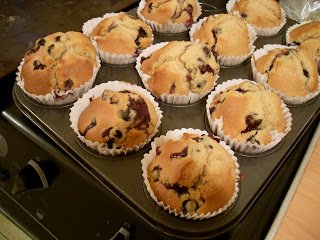 Bicarbonate of soda is a rising agent that needs liquid and something acidic to make it work - you often find it called for in recipes containing buttermilk or sour cream or something like that. Baking powder is a rising agent which already has the acidic bit added and so only needs the liquid to make it work. And here's the best bit... you can make your own baking powder by adding 2 parts Cream of Tartar(what is that anyway?) to one part Bicarbonate of Soda... ta da..... 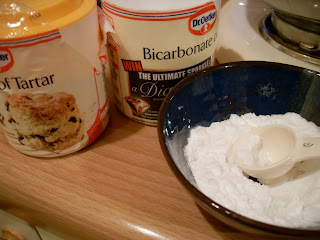 I had Cream of Tartar in the cupboard - can't remember what I used it for, and I have no idea what to do with it - I must have bought it for a recipe but it beats me... anyway.... one batch of choc chip muffins just out of the oven later and I can confirm that it works, but perhaps not quite as well as the ready made baking powder, but the most important thing is.... they taste just fine! 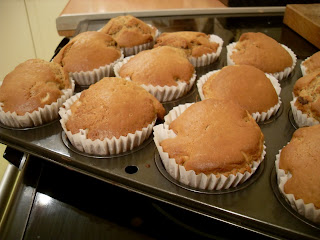 Chit Chat Cooking What is a Technobilly?