Sock it to me!

- October 12, 2009
I don't know where the desire came from... but it has been growing for some time now... and I don't know what suddenly made me decide to do it... but the urge was strong. I suspect that perhaps I watched too many old war time films or read too many of my vintage women's magazines from the early 20th century... but I have had a really strong desire to knit some socks. 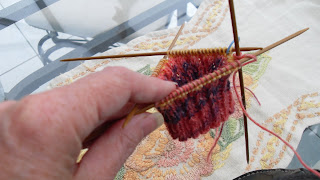 Now you have to understand that I am not an especially good knitter. I have only once managed to knit myself a jumper (though I have started a few) and it ended up being used as a full length winter dressing gown by my neice when she was away at uni. It didn't start off that long... but that is the thing about my knitting... it always seems to grow... of its own accord that is. but I hoped that socks would be different... since they are obviously a quick project... and don't take up too much wool.

I decided to buy a kit. And then because I couldn't wait for it to arrive I went shopping and bought some wool and needles and got a free pattern with the wool... and then.... I began to knit. 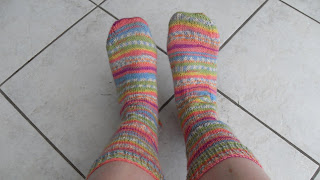 Now the first pair did get a little large and in fact PhillyBilly is wearing them now... (that's them above... the pinky ones!) but he thinks they are cool - kind of eco warrior socks. 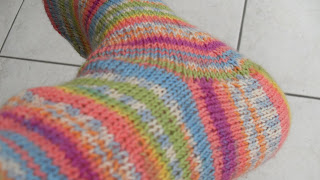 The one's below are presents for someone so shhhhhhhh. Don't tell. But she has the same size feet as me so I modelled them for the photograph. There was enough wool left over to make a little pouch into which I put some dried lavender that I brought home from France. That's a nice thing to put in your sock drawer. 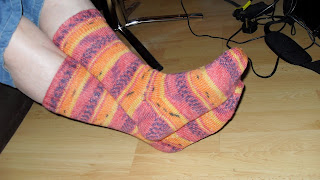 I think everyone is getting socks for Christmas now. They are sooooo easy to make... and the yarns you can get nowadays are totally fab!! All of these socks are knitted with just one yarn... some of them look like fairisle don't they? It's sooooo clever. 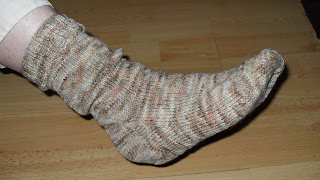 This is the pair I made for BillySteve... but it's me modelling them for the photograph.
Clothes Festivals Sewing What is a Technobilly?