Showing posts from August, 2009
Show All 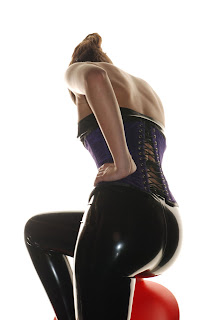 Before I gave up the soap company I used to do a little side line that I enjoyed enormously. Because the Victorians are very much my thing and Victorian women especially - Julia over at Marmalade Kiss is not the only person who knows about CORSETS! Well ok.. .she is the only person I know who actually makes them... and makes them really well. But I digress... I used to talk to WI groups about the secrets of a Victorian ladies boudoir , having arranged beforehand for a WI volunteer to be my model. The model was asked to wear a pair of shorts or leggings and a little Victorian chemise top that I provided. I would then proceed to dress her in Victorian underwear... in front of the audience, the stockings that come to just over the knee and then the shoes (must put on the shoes BEFORE the corset or you wont be able to put them on at all!) the split leg drawers, the underpetticoat, the corset, the overpetticoat and sometimes even a bustle. Strangely... nearly every time I did th
1 comment
Read more 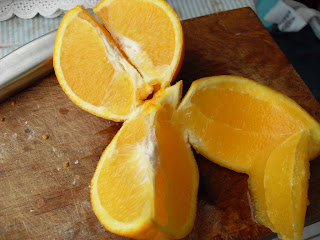 As most of my followers (those paying attention) will know... I have been adding to my website http://www.natural-skincare-made-easy.org on a regular basis... uploading pages on various different topics to do with skincare and that includes quite a few recipes for making products at home - from stuff you have in the kitchen. Well on that vein... and after waxing on and on about having nice skin I thought I should pay much more attention to mine than I do... and Mr Technobilly appreciates my making an effort too. The allotment is great but all this outdoors stuff takes it toll! So I decided to do a skin peel. Now normally skin peels are rather harsh and chemical based and sting like crazy. The idea being that you use an acid to remove the top layer of dead and dying skin cells to reveal the more beautiful younger you beneath. Well Mother Nature has acid too you know, so I headed off to the kitchen and my fruit bowl and made myself a natural skin peel. I used an orange, a fig
2 comments
Read more 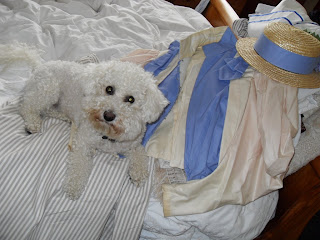 Yesterday morning I looked out my Victorian costumes ... Oh dear... my first choice was too small for me... but I did manage to find a blouse that fit but had to wear a different hat, the one in the picture just didnt match. Then I put some of my Victorian women's periodicals into a bag and set off for our local village hall - where I was to give a talk to an audience of about 35 people. It has been quite a while since I did this sort of thing. I looked at the sea of faces and went almost totally blank... but they were all smiling so I picked up one of the books and read a little to them. It went really well and I soon got into my stride and we were having quite a laugh at how Great Grannie's world was strangely very similar to ours today... even though there is so much that makes it different. Sometimes I feel like we stand still and the world simply whizzes by us. I picked up one book of women's magazines dated 1900 and read the editorial which proclaimed how aw
3 comments
Read more 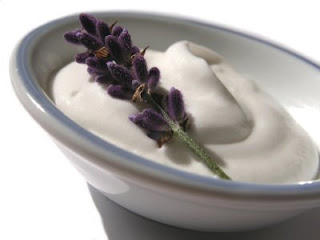 Today I have an announcement. I have a new website and although it isn't finished, it's time to let it loose upon the world. I hope that I have done enough to let everyone see what it will become... once totally finished. It is about Natural Skincare . I hope that you all don't instantly turn off and click away right now. You see I have always been interested in having lovely skin... because I never did when I was young. I was plagued by acne and excema and rashes and itches and allergies to this, that and the other. And because I used 'the stuff the doctor gave me'.... I basically ruined my complexion for life. And yet... from time to time I get compliments on my skin. I put it down to my casting spells on people... if I talk enough about all the wonderful natural things you can use on your skin I think people start to believe that I have a flawless complexion and that's what they see. But of course I don't, and I'm not obsessed with getting
8 comments
Read more

To Have and Have Not

- August 01, 2009
It has rained and rained and rained, so for the past couple of weeks I have been doing a lot of work on the computer. So much so that I have now got RSI (Repetitive Strain Injury) in my mouse-hand! Banned from the computer, the weather totally rubbish, what will I do? Ah! ...I know... ever since I inherited my Aunt Nesta and Uncle Alistair's Penguin book collection I have been meaning to catch up on reading all those Classics that I never read when young. So I closed my eyes and let my fingers glide along the spines of the books until I felt compelled to pull one out. What did I get? To Have and Have Not by Ernest Hemingway, winner of the Nobel prize for literature 1954 - and the book cost 2/6 (2 shillings and 6 pence). Mmmm. Not sure about this one... but ... ok... I had a go. The book is split into three short stories about Harry Morgan - not a nice chap, he is a murderer, a gun runner, people trafficker, booze smuggler and fisherman with boat for hire, working the
1 comment
Read more
More posts