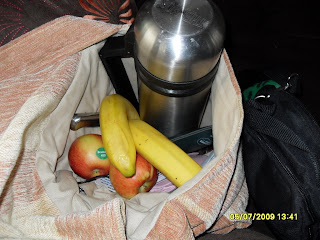 ...cold drinks and fruit and dog stuff (poo bags, water) and excitedly made our way over to the new allotment. It was really hard to decide what to do first ... it seems so big all of a sudden. 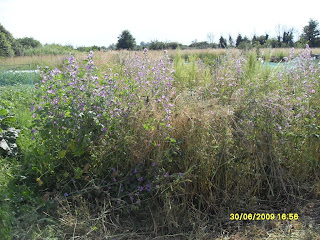 We made a start. Strimming! Well that lasted about five seconds... strimming is great on grass but a lot of what was growing had thick woody stems so we had to abandon the strimmer and concentrate on cutting it all down with the hand shears. We discovered that the bed we were working on used to be the onion bed... strong smell of onion and the occasional gone to seed onion plant... and then the big giveaway... the little plastic marker that clearly said ONIONS. 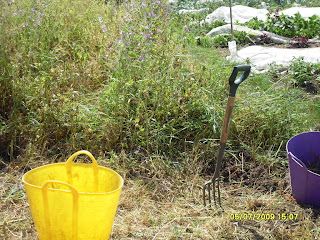 No sooner had we started than the nice couple from the neighbouring plot turned up and introduced themselves. We learned that the plot had only been abandoned for one year so in fact we are having an easy time of it! Then another couple came to talk to us... they don't have an allotment but their son lives in the village and they came for a look around. And then another couple came to talk to us, they do have an allotment and theirs was much harder work to clear than ours. By the time all our visitors had passed by we were still only a couple of feet into the allotment. We were having a hard job hiding our giggles when the next allotment holder introduced himself! At this rate it will take us the rest of the year to get even a small patch cleared! 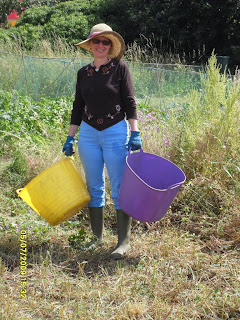 We discovered that the previous tenant of the plot had left behind quite a number of tools, hidden amongst the 6 foot high weeds. We stacked them all together, hidden deep in the interior, just in case he wanted to come back for them. If not... then we have spare sets of tools that will come in very handy. We also discovered that rhubarb grows very big in the allotments. Everyone apparently has loads of it, so much so they are very happy to give it away if they can... we have a large rhubarb patch on our plot too... I can see rhubarb pies, fools, jams and jellies and perhaps wine too! 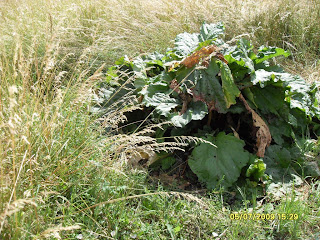 I began to think that we were being a bit optimistic hoping to get something planted later this week. Not daunted we carried on. Further into the jungle we found some old carpet that had been laid down to suppress the weeds and grass underneath. We decided to move it to the bit we had just trimmed down and then perhaps we could use the bit under the carpet to get something planted fairly soon. 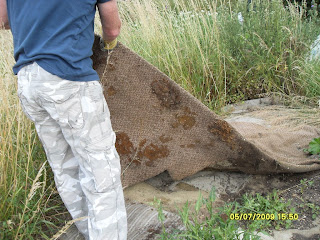 Under the carpet we found more carpet and several slow worms. I havent seen a slow worm since I was a child. They shimmered bronze in the sunshine... which they didnt like so we moved them to a spot further back that has more carpeting laid down. 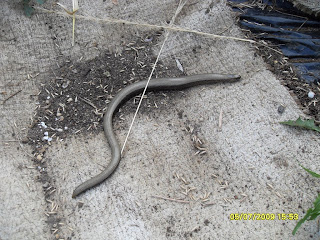 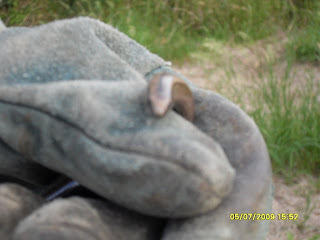 This is the spot we picked out for our weed heap... its so far back in the allotment we may never get to it... but by the time we do, if we do, the heap should be well composted down. But the seeds of the couch grass were everywhere. On the ground, blowing in the wind and falling off the carpet as we dragged it over to the cleared spot... nothing we could do about it. I reckon we will have some serious weeding to do over the next few years to keep it in check! 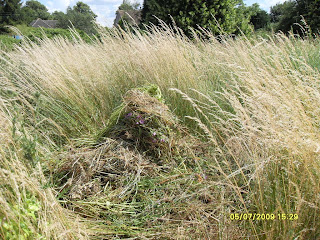 Altogether we were there for about 4 hours and we cut down a reasonable plot of about ten foot by twelve. There were huge quantities of common mallow growing... cousin of the marsh mallow, their roots go very deep! It's hard work clearing them. But we just cut off the grass as short as we could and then covered the whole lot with carpet. Good grief we were tired, and BillyFergus was totally bored, sat in the car in the shade wondering what on earth we were doing. 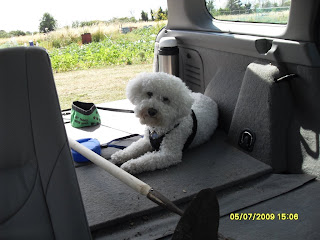 And when we got home... BillySteve prepared a farmer's treat... (no not a cup of tea... though it was a difficult choice)... Ice cold Corona and Lime wedges! This farming lark is great! 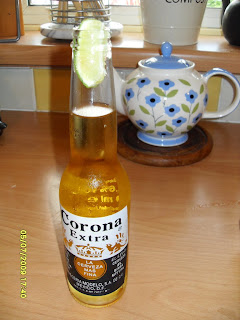