The Tailor of Port Harcourt

- June 17, 2009
Two tailor's actually! The first lady of Rivers State - Dame Judith Amaechi - made us a gift of a traditional Nigerian outfit using fabric made in Rivers State. We were so excited about this, all of the traditional outfits we had seen so far were stunning, and we couldnt wait for the tailor's visit. The tailor came one evening and brought with him a couple of fashion magazines for us to choose the style as well as a large bag full of fabrics, both from the Rivers State and also from other areas of Nigeria. We were in heaven! 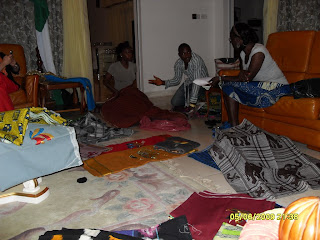 The fashion magazine was called Trendy Birds and I was hoping to be able to nab it to bring back to show my friends but I soon realised that it was an expensive purchase for the tailor and without it he would not be able to show prospective customers the latest styles. I quickly chose my fabric... a lovely green leaf print - green is always a safe bet with my complexion and hair colour. I also picked my style and then changed my mind and chose another one. 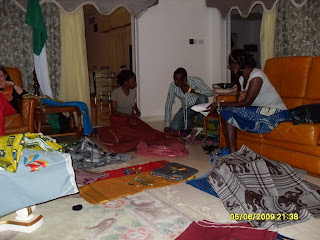 Some of the girls took quite a time choosing their styles and modifying the designs even further. I wondered if the tailor was quite following what we all wanted as we had to have everything we said translated into Pidgen for him. He wrote down our measurements and had us put our names next to them and then wrote our names on tape which he attached to our chosen fabric. In the back of my mind I thought he was bound to make an error and we would end up with the wrong fabric or the wrong style or the wrong sizes... actually I was wrong... he knew what he was doing! I chose a second fabric and the same design and asked him how much it would be to have it made up for me... including the cost of the fabric and the work in total about £15.
All the fabrics came in 6 yard lengths. This gives you enough to make a long skirt, a tunic top and a scarf for your head. Or a traditional wrapper skirt that consists of an under skirt and a shorter wrap around plus a scarf for the head, you would wear it with a contrast tunic top or blouse. Not all the styles in the Trendy Birds magazine were long... but we figured that we ought to push the boat out since it would be a shame to choose something that we could have done at home. 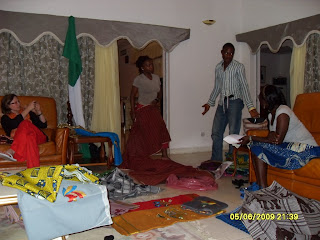 That was an interesting evening. But there was more... another influential lady whom we met wanted to buy us a gift also. She sent another tailor to visit us and a bag full of fabric which was already measured out, to make us traditional Kaftan's or Boo Boo's. 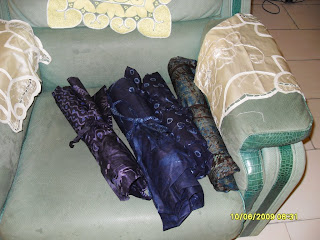 What is a Boo Boo I hear you ask? Well... a Kaftan has a sleeve inset and a Boo Boo is cut all in one piece. 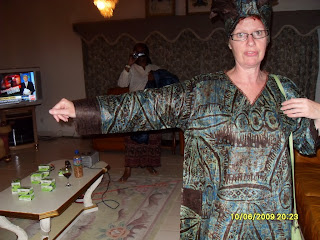 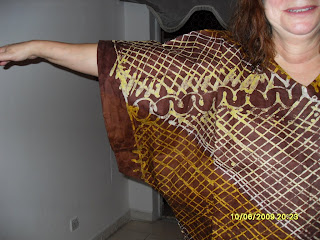 I wished I had my camera on me when the second tailor arrived. He came with this......... 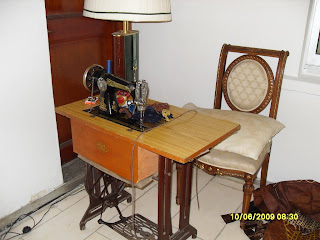 ......treadle sewing machine (made in India called Amro Brothers... but almost identical to an old Singer) on the back of his motorbike! He took our measurements too and then he cut out the style (without a paper pattern) and began to sew. The Kaftan and Boo Boo fabric was very stiff. It's a wax relief batik print but they have starched it until it practically stands up on it's own. One of the girls gave hers to the laundry man to wash in the hope that it would come back softer but they just starched it again! They were not the most comfortable things to wear. 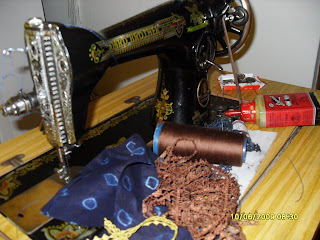 Judith our wonderful 'aide/pa' asked us if we would like to wear our Kaftan's and Boo Boo's at the closing ceremony at the end of the two weeks. We said we would happily, but hadn't actually thought it through. What we ended up doing was wearing our outfits and dancing to a traditional African song while waving white handkerchiefs... it was supposed to be a traditional Rivers Dance but honestly..... I think I saw tears tripping down their faces! One of the ESI staff who surprised us in the office when we were changing into our outfits simply exclaimed "Lord Have Mercy!!" at this point it was our sentiment also! 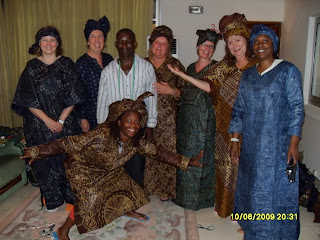 Our other traditional costumes arrived at the training workshop on the last Friday lunchtime. We quickly tried them on and gave instructions for minor adjustments. The tailor took them away at about 2pm and then delivered them to us at Government House at 7:30 that evening... just in time for us to wear them to our leaving party. 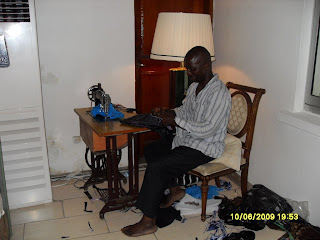 With help to tie our headscarves we actually scrubbed up quite well! The comment from the guards was "you look fine fine!! Like Africa woman!" We all took it as a compliment, even though we were not altogether convinced that it really was 'fine fine'. 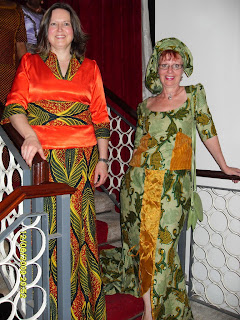 I think both tailors did an amazing job. I really loved the whole thing about getting the fabric and choosing the style, changing the embellishments etc. It was very reminiscent of all the things I have read about Victorian times before the advent of 'off the peg' clothes. In Rivers State there were very few off the peg clothes, most women would simply call out the tailor. All the Nigerian lady's love to make little changes to the standard style and their clothes always have individual touches to make them look different. I purchased extra material thinking I would have other outfits made but in the end I didnt have time and simply brought the fabric home with me. I'll photograph it and show you on another post. Here are some other styles for you to see. 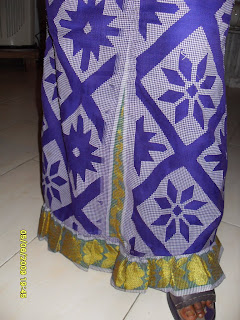 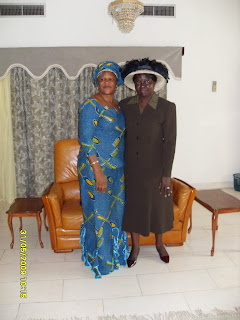 Yes that is a spoon and fork pattern on the fabric. And look what she has added to the bottom of the skirt to give it a touch of movement and interest. 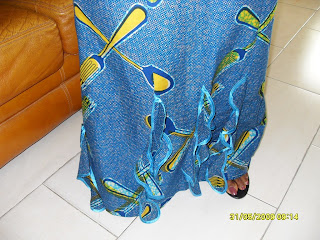 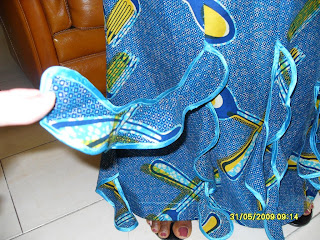 Below she has had matching ribbon placed in a curve down the front of the skirt. 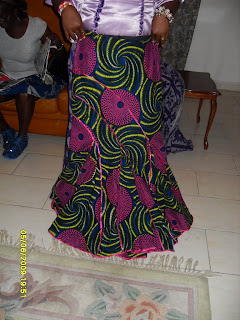 And here the skirt is embellished at the bottom with contrast gold strips which are only sewn on one long edge and very slightly ruched, giving it a raised look. 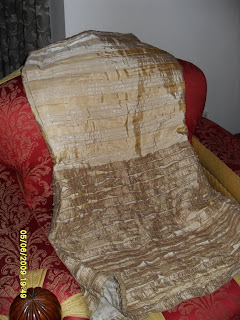 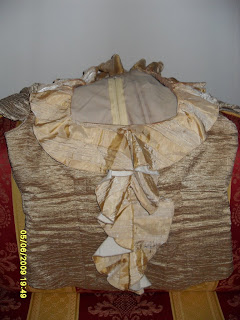 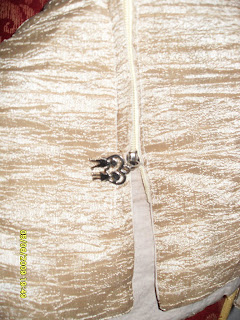 This is the zip at the back of the tunic top. All the tunic tops were zipped at the centre back and had total open out zips like an anorak would have. All of their zips have fancy little zip pulls on them, including the skirt zips... they don't try to hide them, invisible zips are not used. Very cute! This one below is a short skirt about knee length and worn to work during the day with a plain white t shirt. Just above the puff ball hem is a wide strip of sequins! 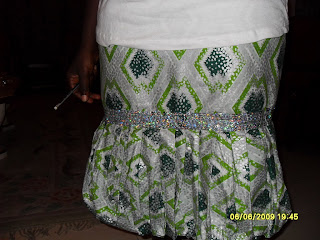 And on this one the tailor has cut around the pattern on the fabric and bound the edge in gold thread to make an interesting hem. 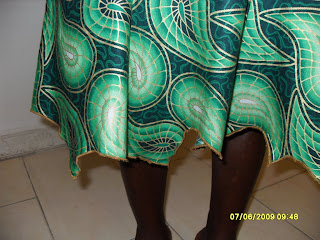 Look at the detail on the hip of this short skirt below... 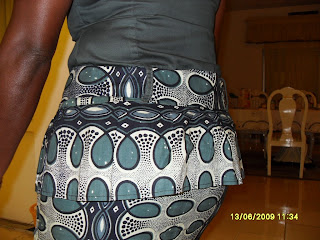 And the bottom of the skirt at the back! 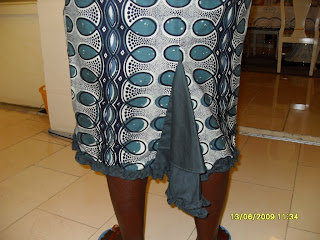 I should really have made this two posts! I still have more photographs... but I think that will be enough for the moment or you will be getting bored. Tomorrow I will tell you a little bit about the food, then about the bootie dancing and then all the extra bits I haven't included in a section of their own... and then... well I have an African giveaway! So do check back!