- June 16, 2009
I thought I would tell you a little bit about the actual soap making that we did with our trainees. It was very basic and I have never made soap quite like that before. We did not have time before the training began to do a practice batch so we had no idea how it would turn out. For those of you who have never made soap I should explain that hand made soap can often be more magic than chemistry. Of course it is all chemistry but we are not chemists, and the conditions under which the soap was made was not a laboratory. There was a lot that could go wrong. We had red palm oil which was the most commonly available oil. It smelled very strong and not especially pleasant. I was a little silly and didn't take any photographs of the oil - perhaps some of the other girls did, I will see what I can get. 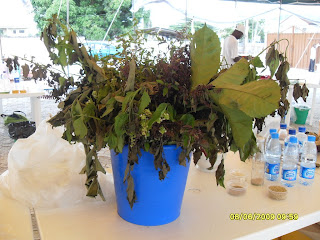 We were also using Palm Kernel Oil. This was much paler in colour ... sort of dark yellowy brown. Until you got near to the bottom of the barrel when it turned into black gunge. At one point I made a batch of soap from all the gunge at the bottom and it still turned out a pale cream colour, which was a big surprise! The red palm was so strong that after the first day we changed the recipe and left it out. 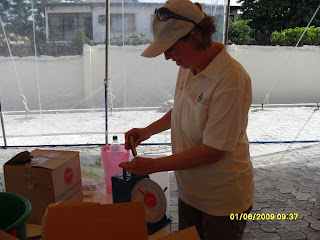 We had no idea how quick it would trace in the heat and humidity and it was quite a surprise to find that trace was instant and that it took about 5 minutes to begin setting up. We had taken stick blenders with us but didn't need to use them at all. We asked some of the ESI staff to get us herbs and spices from the market in order to colour and scent the soap as best as we could. Many of the students didn't understand that we preferred not to use synthetic colours and perfumes (essential oils were almost unheard of and those that were available horrendously expensive). I was also asked several times what ingredient they could put into the soap to bleach their skin a paler colour or make it more chocolate coloured. Of course I gave the 'everyone is beautiful' talk but many of the young girls especially looked at me suspiciously and it was clear that advertising and television had a lot to answer for. 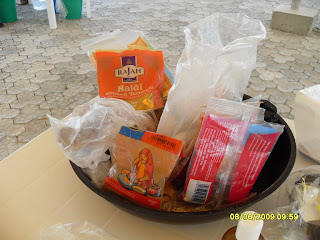 We chose the most basic equipment that could easily be found in the local market. A strong plastic bucket as a soap pot. A stainless steel spoon, a strong plastic jug for the water and a small Tupperware type lidded container for the caustic soda. We didn't use thermometers and occasionally we didn't even wait for the lye to cool down. We also did not heat up the oils, they were liquid anyway in the heat and what was the point of using fuel or energy when in fact it was not required. This kind of made our normal mode of teaching using temperatures and careful controls quite out of kilter but the end results were still some really nice soaps. 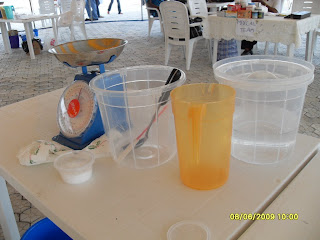 We soon realised that the hardest thing for many of our students was getting the hang of the scales. They were not digital which meant that a basic understanding of grams and kilograms was required. It was baffling at first to find answers to the question "how many grams in a kilogram?" like 1.6 or 560 and other's equally strange. But then we realised that many of them had never had to use any kind of weight measurement in their entire lives. All cooking and recipes were done using cups of ingredients or 5 tomatoes, 3 bananas etc... fabric is sold in 6 yard lengths because this is sufficient to make a traditional outfit with scarf for the head. The whole concept of measuring weight was very alien. The first part of the training was always devoted to the scales and the students seemed to enjoy playing with them if we had time afterwards. 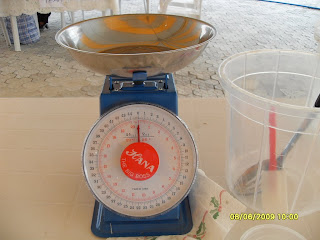 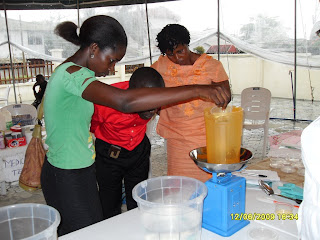 Of course there were some students that simply could not grasp the concept of accurate measurements and the calculations of oil sap values which is fundamental to the formulation of soap recipes, there simply was not enough time to go into it in any more detail than we did. But there were plenty who did understand and it was very rewarding to see the glimmer of excitement in their eyes and many of the questions they asked were very focused on how they could develop their soaps and market them to their communities.

The charity that we were working with are investigating associated industries such as the production of essential oils and re-opening abandoned coconut plantations* in order to increase the opportunities for entrepreneurs and general employment within the Rivers State area and we are hopeful that many of our trainees will become quite successful. 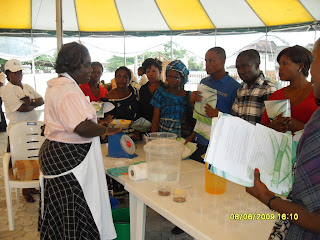 The volunteers who worked as our interpreters during the training sessions became very good at soap making and during the second week they took some of the sessions while we looked on. Their job now that we have left is to provide information and support to the students should they need it. Above is Dr Finebone taking a soap making class.

Very early on in the training when I was explaining that the soap may not pop out of the plastic moulds very easily but if they put it in the fridge or freezer until cold it would then out, one of my students said "what if you haven't got a fridge?" the question haunted me during the rest of my stay. I could not imagine coping in that heat without a fridge. I realised that I take for granted so many things. 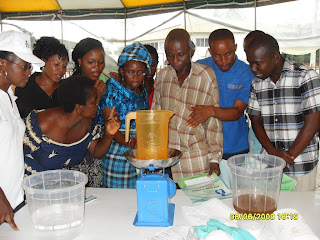 In spite of the obvious poverty that some people in Rivers State live, I did not see any dirty people. I was prepared for the possibility of BO smells, especially in the heat, but very rarely smelled anything like that at all. All of our students and helpers were immaculately turned out. Their clothes very clean and neat. All of the children we saw were equally clean and neat and very well behaved. Although many children were brought along by their mother's to the training there were no tantrums, no answering back and very little crying. And as I believe is common the world over... where people seemed to have very little material things, their happiness knew no bounds.
I just re-read this bit and it's wrong to say their happiness knew no bounds because of course some of them would be very unhappy with their current situation. What I really meant was that they were full of fun and laughter, liked any excuse to dance and sing and were in general really pleasant people to be around. 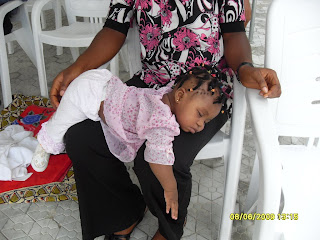 As you can see... soap making is tiring work!

*When oil was first discovered in Rivers State the local population abandoned their coconut plantations to work on the extraction and production of petroleum products. There are many similar natural and renewable resources in Nigeria that are not exploited to their full potential. Unfortunately they are seduced into wanting what we have by the television and movie industry and did not really believe me when I said that they should learn from our mistakes and not pollute or spoil their beautiful country in the desire to obtain all our modern conveniences. I think most of them thought I was simply being mean and when I said that the oil would run out and what would they do then? Mostly they looked at me incredulously. One or two nodded and understood but for many it is a difficult concept.
Soapmission Africa