- June 14, 2009
We did it!!! Just arrived back early this morning and of course the first thing I wanted to do was update my blog... well I had a snooze first! I am sorry that I was not able to get online again during my trip but boy do I have some stories to tell! Hope you will bear with me as it is going to take a few posts to tell the tale... and I don't want to miss anything out.
Now where was I? The State Banquet... no... I should do this properly...
OK this lady is Judith. She was a total Godsend to us from the minute we touched down to the moment we left. 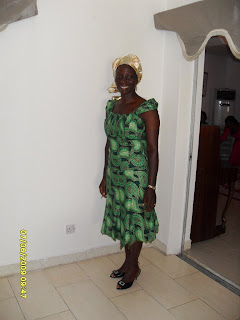 Anything we needed and indeed lots of things that were simply whims were accommodated for by this lovely lady. We had been assigned several ladies working in shifts as chaperones during our stay, most of whom were Pastors but some were the wives of Pastors. They made sure that we were happy and comfortable. 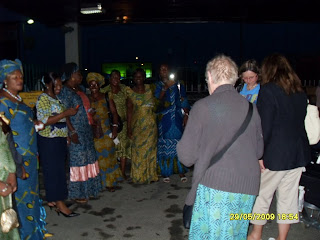 Here are some of the ladies who met us at the airport, the plane was late and they had waited in a terrible rainstorm, looking stunning in their costumes... we on the other hand looked very bedraggled, tired and a bit shell shocked after the worst turbulence I have ever experienced.

We also had our guards. According to the sign on the side of their Jeep they were from the Swift Op Squad or S.O.S They looked after us very well indeed. We were not allowed to go anywhere without them. It was very comforting at first because we know that Rivers State has problems with lawlessness, something that the Governer is trying to address, but after a while it became a little like being in prison, albeit a very gracious one! 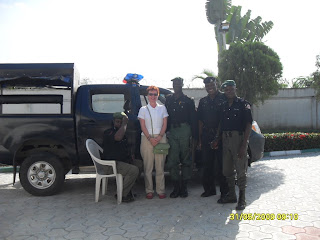 This is Pastor Millie dressed for the state banquet. We, unfortunately did not look quite so grand. Our traditional costumes that the First Lady had made for us were not ready until the last night of our stay... but more on that later. So anyway... there I was in a little Primark summer dress going to a State Banquet. 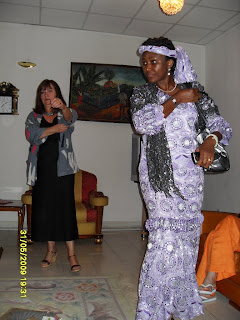 I hope that we did not look too out of place. At any rate everyone was very kind and gracious. Even if we had not looked our best I am sure they would not have said anything. Here we all are ready for the Banquet. 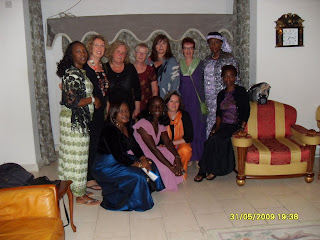 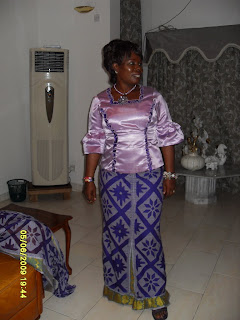 The Banquet was to celebrate democracy day... 10 years since Nigeria became a democracy. The speeches during the evening made me think that we take our democracy for granted... we are very fortunate and most of the time we dont even realise it. There was entertainment by choirs and dancing too... I was not able to take many photographs because I couldnt see to change the setting on my camera and all the pictures came out very dark. 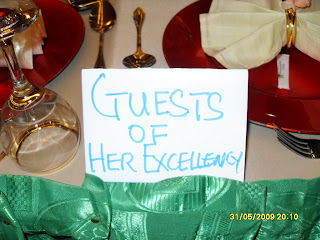 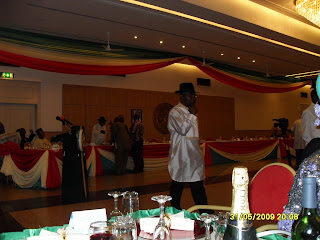 Here you can see a very well dressed gentleman walking to his table. He is wearing a loose dress shirt which has a little bit of bling in the top button - they all had diamond or gold studs in their top buttons (but left undone) and fancy cufflinks. A large number of the men were wearing similar hats which unlike here in the UK, they kept on all evening even throughout the meal.

It was a late night because of the number of speeches and we were a little anxious about the training which was to begin the next day. We had not been able to see the venue and after tales of how it fell down in the storm we were a little nervous about it. The training was, after all, why we were there and we felt it was very important that it be a success. We fell into our enormous beds very tired and set our phones to wake us up bright and early. Some of us had to share beds by the way (with each other of course... not with anyone else! I was lucky enough to have this one all to myself!) 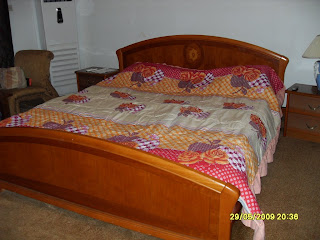 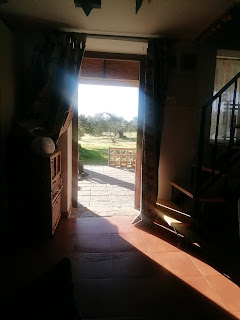