- June 18, 2009
I dont think I thought too much about what kind of food we would get during our visit to Port Harcourt. When we thought we would be staying in a hotel we had the option of several restaurants but as it turned out that we were staying at a Governement Guest House, and we were very much at the mercy of our housekeepers, Margaret and Joyce, and their staff. 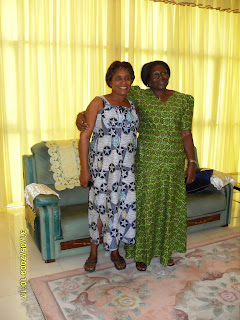 The first couple of meals that we had were very English and after a request to try local delicacies we had more adventurous offerings. As some of these were not eaten, we settled back into a more English diet, with one or two oddities remaining on the menu.
Breakfast would be porridge, fruit, eggs, toast and honey, fruit juice and tea or coffee. We also had non-sweetened custard one morning which was strange. I think breakfast was my favourite meal, closely followed by our picnic lunch which was bussed from our guest house to the training venue every day for us. 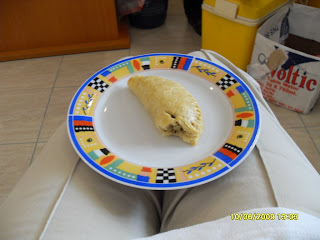 A firm favourite in the picnic lunch was a spicy chicken pastie thing. The pastry was home made and very very good. We always had fresh fruit salad - mango and pineapple and water melon. 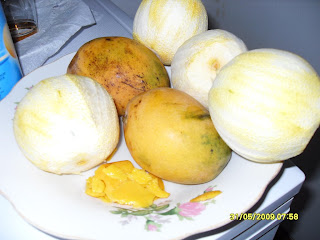 Our evening meal was always a buffet. Every day there was a river fish (large and trout like but no species name was ever forthcoming), chicken pieces, pork things... sometimes it was spam and a mushroom sauce which was like a curried mushroom and a curry sauce which was like curried vegetables, macaroni cheese which was cooked macaroni without the cheese, several different types of rice (fried, boiled with vegetables or without), noodles and boiled or fried plantain or yam as well as occasionally aubergine. We also tried a local delicacy called Pepper Soup. This consisted of river fish and winkles in a spicy peppery sauce. It could be made with goat meat too. 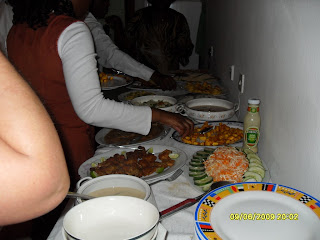 We also tried a local delicacy called Garden Eggs. I hated them! You eat them raw... and they taste like they aren't ripe. Very bitter. Member of the aubergine family apparently but beyond that I have no idea! This is what they look like. 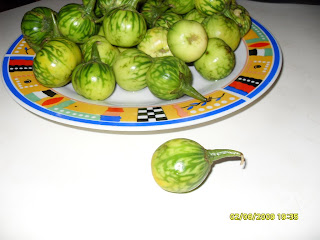 We also had some corn on the cob, which was not sweet but floury tasting, which we ate with boiled pears... the pear was not really a pear at all, more like a plum with a vaguely lime-ish tang to it. The idea was that you ate the two together, it wasnt bad at all. We saw several road side stalls cooking and selling these delicacies so obviously it was a very popular local choice. 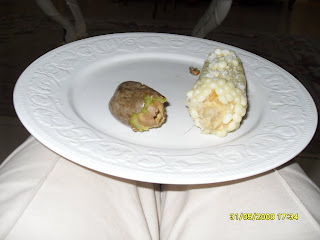 In general we were very happy with the choices that Margaret and Joyce made for us as regards food. But in particular we were not used to having the meat and fish quite so overcooked. In the hot climate they cannot hang meat or keep it for any length of time so they have developed a habit of cooking everything until it is really over done by european standards. I am sure they would be horrified at a 'blue' steak since they boiled the steak first before frying it!
We all had lots of snacks, peanuts, crisps and fresh fruit, mangoes and bananas and ready peeled oranges (the skins of which were actually green rather than orange!) in our rooms and after a couple of days some of the girls managed to get a regular supply of cans of beer too!! 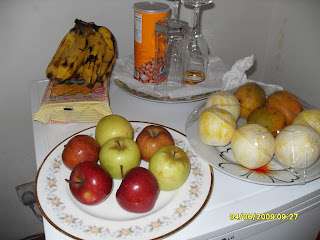 Here is Margaret and Joyce with the rest of the staff who waited on us hand and foot... we really had no complaints! In fact we were spoiled rotten!! 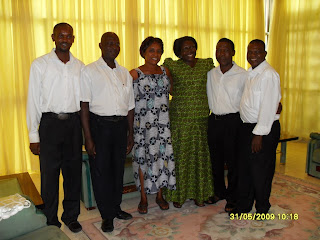 All the same you can have too much of a good thing as I managed to lose 4lbs over the whole trip! Mostly I think it ws the lack of dairy products and cheese! So I know what to do if I want to diet in the future!
Soapmission Africa