- June 15, 2009
We were up bright and early for our first day's training. We soon learned that even if we got up bright and early our driver might not, or the armed escort might be late and even if everyone was on time, when we got to the venue we would sit around and wait for all the trainees to be registered and seated. We had to s-l-o-w d-o-w-n. Every day there were scores of extra trainees turned up in the hope of getting a place on the course, in the end we increased the number we were able to train but there was no way we could have managed them all and still given a quality training session. It made us feel very sad to see so many reaching through the gate asking to come in. 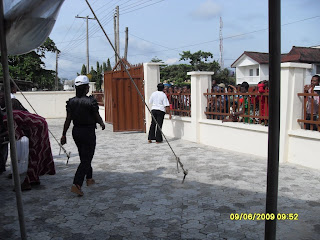 It was very hot. Even though the temperature said it was only about 26 or 27 degrees celcius... the humidity was never less than 95%... it was like working in a sauna. We had also been provided with very fetching baseball type caps which were good at keeping our hot heads even hotter! A couple of days into the training most of us managed to lose these. 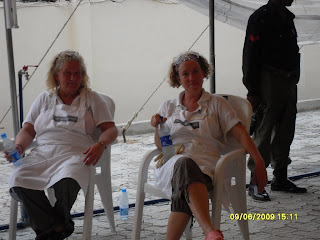 The tent was very sturdy. Like a circus tent with the poles inserted into the concrete courtyard. At the front was a presentation area all set up for Melinda's Powerpoint Presentation and behind this we set up our work stations. It was basically 7 work stations with a central table where we put the oils (Red palm oil and Palm Kernel oil) and the herbs and spices we intended to use to make the soap. 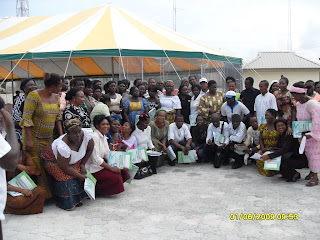 The students came from all around Rivers State... some of them journeying 2 or 3 hours by bus to reach us, and others coming by boat. They came from all sorts of backgrounds and with varying levels of education and we could not imagine what their homes were like. Each of us had a translator because their common language is Pidgen English which is really not very much like the English we speak. 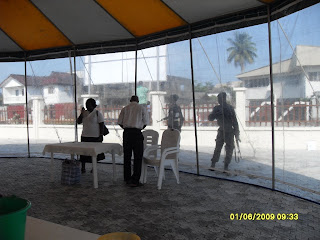 On the first day we didnt get started until around 11am which meant that we were training in the hottest part of the day. Not a good idea. I made a joke to my first lot of students that my brain was cooking. I had to pour almost a whole bottle of water onto my head in order to cool it down! After the training session two lovely ladies came to me and addressing me as Madam... asked me what it felt like when your brain was cooking!! I did laugh!
I wasn't laughing for long though. I began to feel a little unwell later that evening and by breakfast the next morning I definitely had a case of 'the runs' and was feeling a little nauseous. I soldiered on through the morning's training but by lunch time it was obvious that I was not well at all. The doctor on site (and also the lady who had been translating for me) was called Doctor Finebone (a very good name for a doctor if you ask me). She was lovely and after taking my blood pressure and temperature and feeling my pulse, pronounced 'Heat Stress'. I was taken back to the house accompanied by the doctor and several guards and a chaperone called Charity. I was given an injection to stop the nausia and also to make me sleep and put to bed. Charity checked on me constantly as if I was a child. Even during the night she came four times to my room to make sure I was ok. I have never been looked after so well! The following morning I felt a little better but was told to rest. All the staff had been saying prayers for me. I felt very emotional about the whole thing. I did not expect strangers to care so very much about my health. 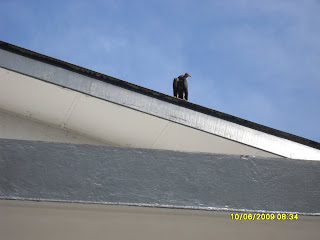 Ominously a Griffen Vulture settled down on the roof of the house the day I was sick... he came every day after that, but we were told that in spite of them being devourers of carrion, they are rather fussy about what they eat!!
Soapmission Africa