Disastor! Joy! Birthdays! and Working Hard at the Office!

- June 30, 2009
There I was all set to pop the African giveaway prize into a padded envelope when I realised that I wasn't quite ready to post it... I needed to enclose a little card or note with some kind words for the recipient. I turned my back for what must have been only seconds and when I turned back... the little flip flop key ring was gone!! Trouble was I didn't notice that it had walked until after I had written the card... and by the time I discovered where it had got to... it looked like this....
. 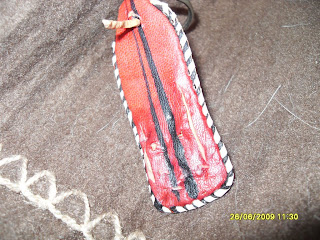 yes... the top of the flip flop is missing and its covered in tiny teeth holes!! Billy Fergus simply didnt understand my wild screeching at all, 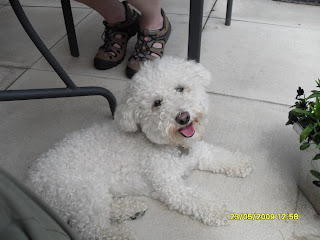 ... so I chose something else that I had brought back from Africa to send to Sara... it's this little stone heart with carving on it... not as practical as a key ring... but pretty all the same... and definitely from Africa! I hope she is not too disappointed. 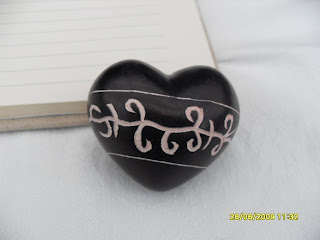 So that was the disastor... now for the joy.... we have at last got an allotment! Whoo Hoo! It's not in our village but only about a mile away and quite a nice bicycle ride too. We officially take it on from tomorrow but we just popped over to take some photographs which we hope will be the 'before' pictures... 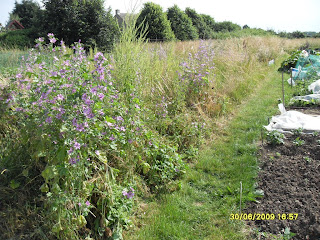 As you can see it is overgrown... but that is only one year's growth which shouldn't be as much work to remove as five years of couch grass (which is what some of the vacant ones are covered with). 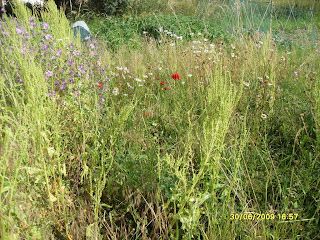 Now I need to get my head around what we can realistically get planted this season... while I peruse my books (and any suggestions on this front welcomed) I have some piccys of our garden produce which has been doing very well this year. 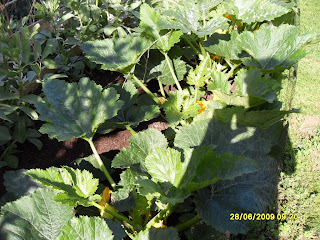 We don't mind too many courgettes since we love them... the children of course hate them so we are having some every day at the moment... it's good to give your kids a bit of a hard time at home... gives them something to grumble about!! Some of the summer cabbage has been turned into lace doileys... 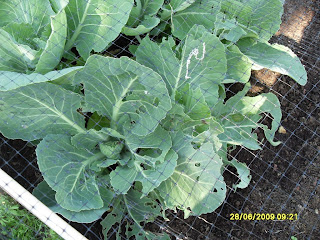 .......but other's are still looking good so I don't begrudge the slugs a share. 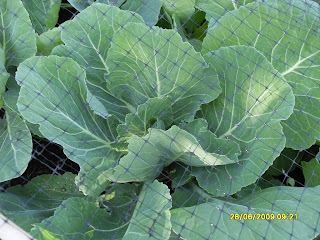 This is the Feverfew, which I don't eat, but which has spread quite a bit this year, I like to leave a space for it in the garden because it is so easy to grow and it attracts lots of lovely insects, it can run riot a bit but is easy enough to pull up, so I don't mind too much if it gets a little out of hand. 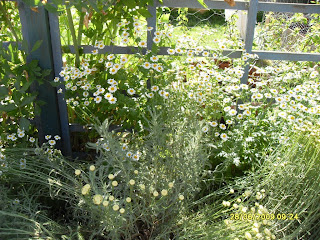 Birthdays! Billy Christina turned 21 earlier this week. She didn't want a fuss (what is wrong with the girl?) but had invited a couple of friends round for the afternoon and to go to the cinema in the evening. Without her knowing I decorated the patio with very girly pink tissue paper and made a birthday tea for her, complete with cake... just like when she was 6! Well, she may not have felt like marking the occasion but for me it was a special day... 21 years... I know it's a cliche but where does the time go? 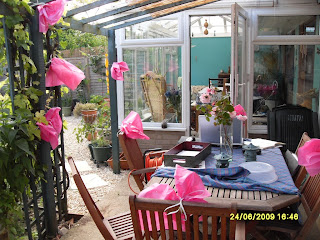 And now for the working hard bit.... this is my office. Well it is this week because the weather has been fantastic. 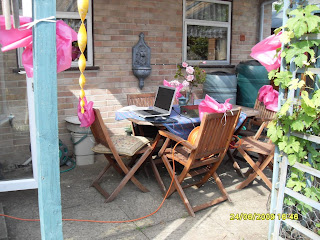 Yes I know it's still covered in pink tissue from Billy Christina's birthday - I like having a pretty office... this is where I have spent alot of time working on a new website concept. It's not quite ready to reveal to the world... in fact there is still a lot of work to be done on it... so don't hold your breath... but if you are interested in plant oils and esential oils and flowers and stuff like that, then you will like my new website... I'll let you know as soon as it's ready for public viewing! All I can say after that is.... I am SO lucky. I try not to forget it. Life at the moment is truly grand. Grateful thanks to all the Gods for such a lovely summer.
Festivals Gardening Soapmission Africa Teenagers The Dog Weather