And then it rained!

- June 19, 2009
I hadn't planned on devoting a whole post to the rain but when I looked at the photographs I realised that it needed it! 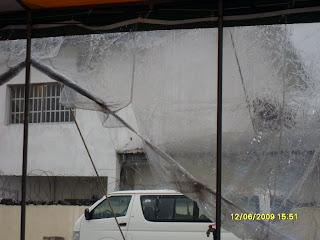 We arrived in a thunder storm. A very scary fork-lightening-illuminating-white-terrified-faces type of storm. And the rain simply fell in sheets. We were told it was just the start of the rainy season and that it wouldnt necessarily rain every day. 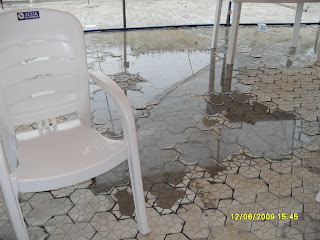 It didnt rain every day but when it came it was so welcome. The dark clouds would approach very slowly and the air became hotter and heavier and we would get so warm and sweaty that it looked like we had been caught in a shower of rain anyway. Rumbles of thunder would be punctuated by sharp flashes of lightening and then out of nowhere a wind would whip at our empty soap moulds and scatter newspapers all over the place. Once the rain fell the wind would die down. Usually the rain would last only a short while and within half an hour you would not know that it had rained at all. 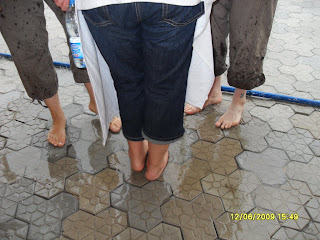 The tent kept the rain off us except during one thunderstorm when the quantity of water was huge and it ran in rivers across the floor. Here you can see the amount of water collected by the plastic side of the tent after only one brief rainstorm. 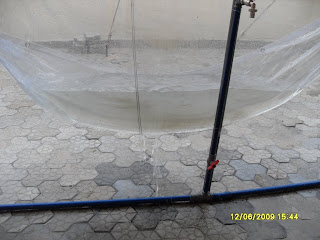 The electrics were a bit of a worry... to us anyway... when one of the ESI workers saw me photographing the rain running down the pole and onto the socket point, he said 'oh yes that's very dangerous' and then used his foot to switch it off... it wasnt for me to comment! 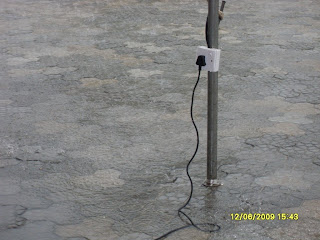 I loved it when it rained. The air was cooler and fresher, for a while, at least. I didn't really want to use an umbrella being quite happy to stand and get wet... until I realised that in the air conditioned office it would then be very uncomfortably cold. On our first drive from the airport in the rain we did see that most people carried their smart work shoes and wore flip flops instead... we thought that was a vey sensible idea. An even better idea was these.... 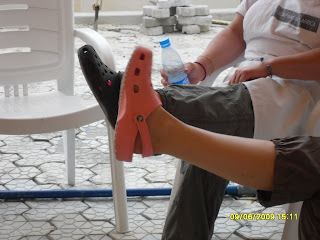 Several of us had taken crocs to wear... they were ideal! Heartily recommend them... and they weigh almost nothing so perfect for packing in your case when you know that you are going to need lots of extra weight for souvenirs! I hadnt expected souvenirs but I did get some... tomorrow I will tell you about the 'bootie shake' and the presents I brought home as well as a special giveaway for my dedicated readers...
Soapmission Africa