The Trouble with Families!

- May 19, 2009
Families!! It's what makes life wonderful, but it can be what makes your life difficult too. I have been thinking a great deal about my childhood recently and various events that happened to me, that I considered traumatic, the death of my mother when I was 11 in particular. And of course that would be a terrible event for any child - but because my father was brought up in a very different world we seemed to do the 'stiff upper lip' thing and we carried on as normal, or as near normal as possible, as if nothing had happened. Of course if you don't deal with emotional events, if you suppress your feelings, they always come back to haunt you later on.
This is a picture of my grandmother (the little girl on her mother's knee - she looks to me like she was squirming) and her brother and my great grandparents. When I did some research into what their life was like I was amazed at what great granny had to cope with. 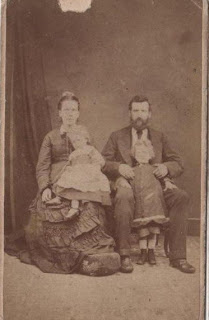 My great grandmother Jessie shown here, about 6 months pregnant, with her second husband Duncan (my great grandfather). I did not know until fairly recently that she was married with four children and widowed by the age of 27, with child no 4 being born two months after the father died. 2 years later Jessie remarried. Her three daughter's from her first marriage were farmed out to relatives or put into service at a very young age. Her son by her first marriage was apprenticed to a trade but still lived with Jessie and Duncan. She then had 7 more children, one of whom died as a toddler of about 2. But she also farmed out one of these children to live with Duncan's elder sister and her husband (below... astonishing beard eh?). They didnt have any children of their own. 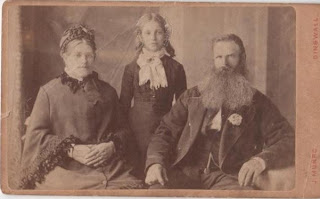 This little girl, called Jane, was sent hundreds of miles away from her brother's and sisters to be brought up by her aunt and uncle. As far as I know she had a good life with them. But I was a bit horrified at the thought of sending any of my children away! There is no point in trying to judge them by our modern day sensibilities. And I understand that it was not uncommon to send children to live with relatives. But I always wonder if the little girl felt rejected. I also wonder at Jessie being able to give her children away like that, surely it wouldnt matter how many you had, you love them all. I do understand that life was difficult enough for them without those extra mouths to feed - but wouldnt a mother feel the loss terribly? I daresay she carried on as normal, did the very Victorian thing, stiff upper lip and all that... to my knowledge.. no backlash later in life, no nervous breakdown recorded. They seem to have just got on with it. Did they suffer emotional problems or did they have another way of coping? I can't decide.