- May 23, 2009
Billy Jon has been working hard to get fit enough for his challenge on Mt. Kilimanjaro in October. Most of his training is cardiovasculor on the bike at the gym. But he likes to get out and walk as much as possible too. 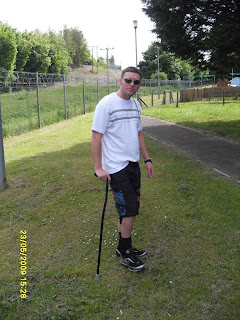 Today we had lunch with him and his wife Billy Carrie and met their new puppy Teigan. 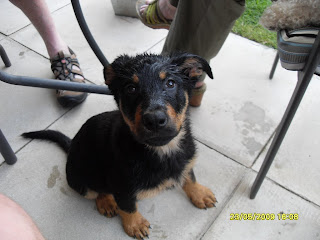 After lunch we went for a short walk and Billy Jon showed me his new leg brace. Without these on his legs he can barely walk. 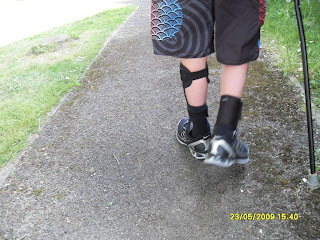 When we first were told that he would have to wear braces, we thought of Forest Gump and were a bit concerned about how normal they would look. But of course these are much more modern. He needs a full lower leg one on his left leg because he has no movement of that ankle at all and it holds his foot at the correct angle for walking. On his other leg he has a shorter one because he has some movement of his ankle on that side. It really is amazing what advances they have made with this kind of thing. With long trousers on, it is impossible to tell that he is wearing them, and only his stick gives it away that he has a disability. 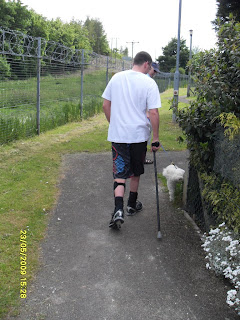 On the 7th June it will be 2 years since Billy Jon was shot. Although we said that we wouldn't dwell on the anniversary too much, because we wanted to keep looking forward rather than harking back, we do have to salute a young man who helped to save Billy Jon's life. This is Cpl Rodney Wilson.

Amidst a hail of bullets Rodney managed to pull the injured Billy Jon a precious few yards, out of the glare of a street light, where in the shadows he lay safe until help could come. Sadly Rodney was killed. As Billy Jon's mother I feel I owe a debt to Rodney. One that I can never pay, but how can I ever forget.