Showing posts from April, 2009
Show All


Aunt Nesta's wish was to be scattered in the same place as her husband Alistair who died back in 2002. (I promise this is not a morbid post). They had been together for almost 60 years... can you imagine, 60 years with the same person? They had no children so had devoted themselves to their own interests and each other. How completely they lived for each other was apparent in Aunt Nesta's desolation after the death of Uncle Alistair.
Alistair had been a professor of chemistry at Oxford University, Nesta was also a chemist but worked for a long while as a librarian in the Bodleian. Their house was full of books and papers... when I say full... I mean FULL. They had long ago filled every shelf, every nook, crannie, cupboard and box, and a…
5 comments
Read more 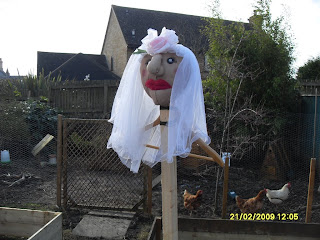 Do you remember my first scarecrow?

Well here is no. 2!
He's a salty sailor and no mistake... (Good grief why did I say that?) modelled on Johnny Dep in Pirates of the Carribean... can't you see the resemblance? I know it looks like he has two scars but one is actually his hair which is blowing in front of his face. And clothed by a nursery school teacher who has found him a home in the school garden. Apparently the children are really pleased... which makes me really pleased too!

The next project is a French onion seller for friends who live in the south of France (hopefully finished before I go to Africa).... mmmm... a little Gauloise in the corner of 'la bouche' methinks.
While I'm on the subject... here's a quick update on the garden. Everything is growing! Its so exciting! Photographs soon. Oh and the latest score with the hens... Wilma 1 - Miss Skinny 0. Miss Skinny is limping and has several feathers missing showing bare flesh (I suspect Wilma jumped on her…
1 comment
Read more 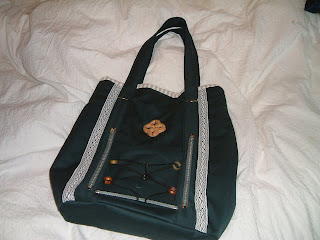 OK, the deal is this.... I am planning on having a stall at our local carnival on July 4th in order to raise money for Help for Heroes and my son's climb of Mount Kilimanjaro in October. I was going to sell some of the craft things I have made,

and to bulk out the stall I was going to have some jumble, bric-a-brac and books. With all money going to charity. I got the forms to apply for the stall only to realise that I need Public Liability Insurance. I should have known that... I used to have it for the soap company. Oh well, I thought, how expensive can it be for a single day? £55 is the answer and only if I am selling ALL craft items - no jumble, no bric-a-brac and no secondhand books.
I cannot find anyone who will insure me for a jumble stall. I've asked myself...how dangerous can jumble be?

Could bric-a-brac be the cause of some terrible injury? How deadly are books? Well I guess the answer to all of these questions is VERY VERY. 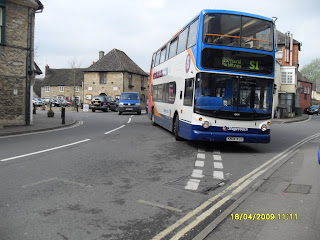 Over the past week or so, Billy Fergus has become more and more reluctant to go out for a walk. Given the opportunity he is a very lazy dog indeed. It got to the stage where he was hiding under the bed in order to avoid a walk. We decided that he must be bored and that it had been a long time since we took him somewhere different. So we arranged a special trip out for him.


He has never been on a bus before. He was very keen to get on,
but then sat between my legs shivering until we reached our destination. Oxford.

Oxford is a young city... its actually very old but because of the university it throngs with students during term time and foreign summer school students during holidays as well as tourists all year round. There is always a buzz of foreign languages being spoken at breakneck speed as well as the possibility of the people in front of you suddenly stopping in the middle of the path to look up at lead flashing, steep spires and our famous gargoyles. There were lots of new e…
6 comments
Read more

I am going on an adventure. It is going to be exciting, challenging and different and I am so up for it! When I first began to sell my soap it was at a time in my life when I really needed to be successful at something, I needed to have something that I could call my own and be proud of all the effort that I put into it. The soap company became everything and more that I wanted it to be and it was when I was teaching people how to make soap that I realised that I had missed my true vocation in life. I should have been a professional teacher . I get such a thrill out of passing on knowledge and seeing people learn new skills that I have taught them gives me such a buzz.

So you can imagine how beside myself with excitement I am as I have been asked by Melinda Coss to join with her and another 6 soap making teachers to go to Nigeria to teach 1500 Nigerian women how to make soap. The other soap makers are coming from all over europe and most of us have not met before, although many of us h…
8 comments
Read more

Re-cycle, Re-use... the Possibilities are Endless!

I have been going to a pattern cutting class with Julia from Marmaladekiss fame. I picked a very simple A-line skirt pattern to make, the real design bit is primarily in the fabric rather than the shape... and therein lies my problem. When I first imagined my skirt I saw a colour... or rather two colours.... the Buddhist monk orange/yellow and red together and the top layer of my skirt should be floaty with the bottom or underskirt layer the darker colour.
When I mentioned floaty... Julia said ... Oooh what about Sari material? What a good idea I thought and almost as soon as I got home I searched on ebay for some. There were indeed lots and lots, but not really the colours I was looking for. Undaunted, I went ahead and bid on three. The first arrived and even though it was not in any way shape or form even remotely close to what I wanted... I made the skirt. I used a red polyester lining fabric for the bottom layer and bobs your uncle... here it is draped over my clothes horse.

When Did I get to be a FAT OLD TROUT?

It's Easter, Billy Steve and I planned a special night out. Its ten years or more since we went DANCING. We used to go to dance classes but because of Billy Steve's erratic work schedule we had to stop. Our particular forte was CEROC it's not too difficult to do and it looks very impressive even when you are just a beginner. Well we used to be quite good and when we have been at a wedding or some such function and are the only ones able to Ceroc we look quite impressive... so I was really looking forward to a whole evening of dressing up and dancing with other Ceroc'ers.


It's been a long time since I got the heated brush out... and my hair gel seems to have got decidedly 'gummy', ah... best before December 2003!! That would explain it.


WHEN DID I GET TO …
3 comments
Read more
More posts