- March 18, 2009
This morning I woke up full of the joys of spring with a real burning desire to springclean, spruce up and generally make my home pretty.... I don't know why... I don't normally feel like cleaning. In fact its something I usually hate doing. I thought all my nestbuilding days were behind me... but apparently not, so I started on the children's bathroom first... I call them children but they are really quite grown up... in some ways. This is one week's worth of towels from their bathroom - 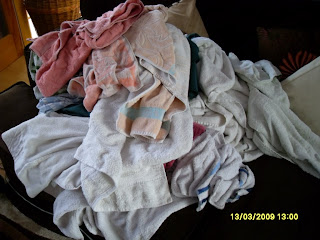 It's ridiculous isn't it!!!!!! I mean how many towels do two people need? After a few minutes intense interrogation it transpires that actually they only use one towel each and they have no idea where all the other towels in the wash basket come from!!$£**%!!!!
By this time I am in full nestbuilding mode and I decided to tackle The Workshop. Cue the dramatic music about here..... The Workshop used to be my soap empire... but that was all sold last August. While I was musing on what to use the workshop for it became clear that Billy Steve had intentions of moving his power tools in. I quickly transferred my sewing stuff and an old couch in there, so quickly that I didnt really take the time to clean it properly... And I think the sewing fairies have been using it during the night because it just seems to have got untidier and untidier.......... 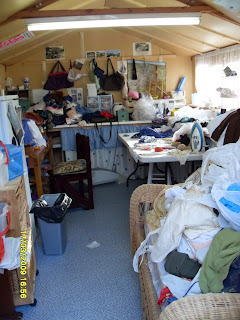 This is the 'before' picture, but alas there is no 'after' photograph because my nestbuilding phase wore off before I finished, now I need the 'Never leave a job half done'-Fairy to visit!