- March 25, 2009
I know in some parts of the world Mothering Sunday is celebrated at different times, but here in the UK last Sunday was Mother's Day. So much in my life at the moment is about being a mother, being feminine, being motherly and I am really enjoying it, really immersing myself in it. I have been a mother for 31 years now so you would think that it was nothing new. And it's true some years I havent really enjoyed Mother's Day, all too often it feels hi-jacked by the commercialism of the card companys. As I brought some Forsythia indoors and decided to take a photograph of it for my blog I felt very much like I was preparing for a bigger festival like yuletide, and I spent a little time thinking about how important celebrating motherliness is. 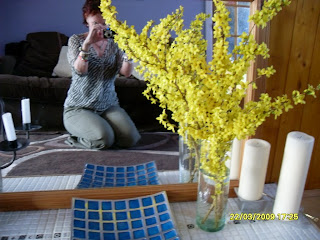 I know that lots of young girls concentrate on careers first, leaving motherhood for 'sometime later' and sometimes they may think of being a mother as a bit of a come down from their worldly careers. They are so wrong. Motherhood is the most challenging of life choices a girl can make; brings with it the highest rewards that life can offer. It seems to be unfashionable to say that the most fulfilling thing I ever did was have children. But it's true and all my other achievements pale considerably next to being a mother. 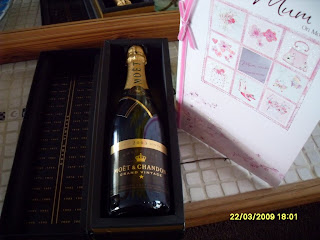 We planned a bit of a family gathering this year, it happened by accident. An invitation to my mother in law to come and spend the day with us snowballed as my husband's two brothers and my neices wished to spend the day with her also, so including the three of my children close enough to visit, we had quite a houseful! 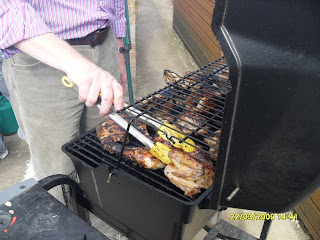 All worries about the cooking disappeared when BillySteve announced that it was warm enough to bring out the BBQ. Which very quickly became a focal point for the guys. Isnt it funny how men like the BBQ?... Is it the fire do you think? I don't think they feel the same about gas cookers? 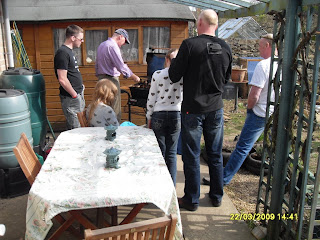 I made a Strawberry Tea Punch which went down a treat. Hardly alcoholic at all but very refreshing. Its very simple:
500g (that's roughly 1lb) strawberries quartered or halved if they are not very big.
Two tablespoons lemon juice
Two tablespoons sugar
1 bottle Rose wine
Some Fizzy Tonic Water
1 Pint Earl Grey or Lady Grey Tea.
Mash half the strawberries and strain through a seive (you don't want the seeds). To this add the lemon juice and the tea (while still hot) and the sugar. Leave it to cool. Once it has cooled down put some crushed ice in a large bowl and then pour on the strawberry tea liquid followed by the bottle of Rose wine and then add some fizzy tonic water - keep tasting until you think it is enough (it really is simply a matter of taste). Float the remaining strawberries on top and there you have it... I added a couple of slices of the lemons too. 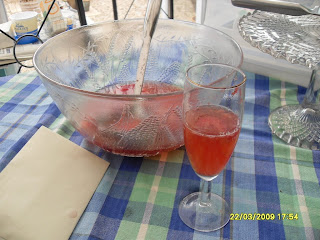 It was a relaxed day full of sunshine, laughter and happiness. If your celebration of motherhood is still to come perhaps you should think about making it a special celebration this year.
Cooking Festivals