- March 13, 2009
At the end of last year my Aunt Nesta died leaving no immediate family and a house full of a lifetime's treasure (or dross... ). Her distant cousin came to sort out the house and I offered to help. It was a very long process because Aunt Nesta never threw anything away... altogether it took about three months to complete the process and was a valuable lesson in not accumulating useless things.
Of course one man's treasure is another man's junk and I have to own up to not being impressed by anything that turns out to be valuable... but fascinated by the junk... especially if it is very old. These in particular caught my eye and have found a place in my dresser drawer along with the napkins and napkin rings... but what are they? 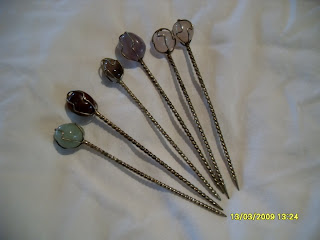 At first I thought they were hat pins but they were kept in her sideboard along with glasses and jugs and general table linen. And on closer inspection they are not hat pins. 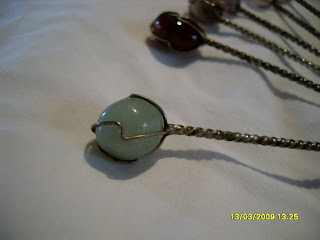 There are six in total and each has a polished stone wrapped around with some kind of metal wire (could be brass) and a twisted wire stem with a very sharp pointy end. They are about 5 inches long from tip to stone. Aunt Nesta was interested in geology and had a number of geodes and polished stones on display in her house so I imagine this was the reason for buying these particular... whatever they are. 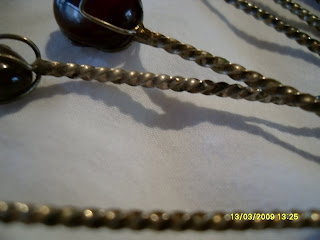 Does anyone have any suggestions as to what purpose they were intended for or what can I use them for now? 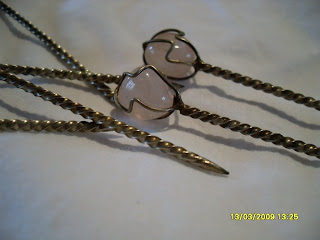