Treasure from the Garden

- February 28, 2009
Our house was built during the 1960's. The land upon which it was built has had a few previous uses. It was farm land immediately before our house was built but previous to that it was the grounds of a lemonade and ginger beer factory. The factory is first recorded in the Eynsham Trade Directory for 1877. The site was chosen because there is a 'celebrated spring' somewhere close by which provided the pure water for the lemonade. The spring is apparently capped over and lying dormant in someones garden. Alas not mine. As well as ginger beer and lemonade they made soda water and non alcoholic raspberry champagne, football stout and cherry cider. During the late 1920's Blake & Co moved their business to another location leaving behind decades worth of rubbish from the factory. A large concentration of which are in my garden. 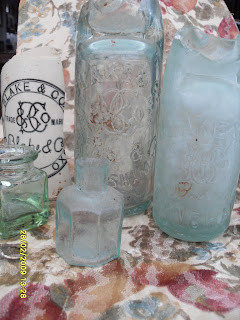 We have thrown away buckets full of glass shards and pottery pieces, these I kept because they are almost whole. The glass bottles would have had a glass marble in the top a bit like this.

But its rare to find one that still has its marble since children would deliberately break them to get at it. The stone bottles originally contained ginger beer. 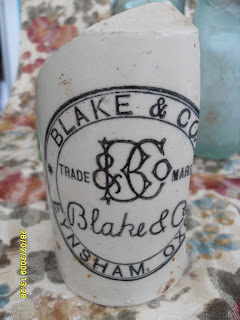 Then I found this ink bottle. It could date from the 1800's but its very hard to tell since this design was still available during the 1920's. My guess is that it was tossed out with the rubbish from the lemonade factory. 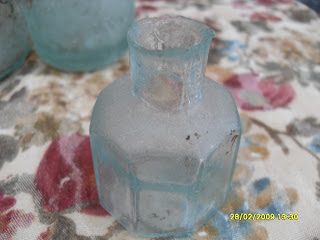 The latest find was just last year when my chickens unearthed this little silver clodagh ring. 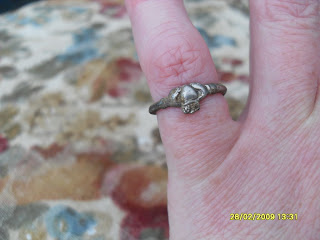 It's very badly corroded but I hope to clean it up sometime so that I can wear it. I have no idea how old it is - again probably from the hey days of the lemonade factory, but it could also belong to someone crossing the field at any time since then. I think I should have been an archaeologist, I get a tremendous thrill when I find something even if it is a broken lemonade bottle. It adds another dimension to gardening that I really like. I thought that it might be fitting if I took one of my old mugs and ceremoniously smashed it and left the bits in the garden for the next generation to find... perhaps I will.
Gardening History